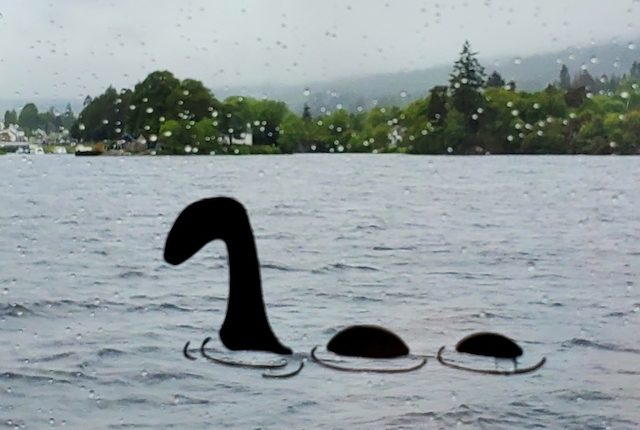 Why go to Loch Ness? After all, no one really believes in the monster and one loch is like another. Yeah, but wouldn’t you just kick yourself if someone saw “Nessie” the day you decided to go to the movies? So of course, we booked a day tour to Loch Ness. My husband had never seen the highlands and I was trying for the third time to see Nessie.

The tour bus picked us up in Edinburgh just one block from our little boutique 3 star hotel, Parliament House Hotel. I highly recommend this hotel if you are on the cheap while traveling. Not only is it a funky little building tucked down a sweet alley, it is next to the cliffs. The beds were wonderful, the bathroom updated, and the Bistro restaurant has stunningly wonderful food. In fact, if you are in Edinburgh and want a mid-priced dinner it is worth the wee walk from the train station to go there. Walk up Waterloo Place toward the Calton Hill rock outcropping. When you reach the old cemetery on your right take a left onto Calton Road. It is 15 Calton Hill. We tried everything on the dinner menu during our stay and loved it all.

Our second day was “one misty, moisty morning, when cloudy was the weather”, as the nursery rhyme puts it, is pretty much what Scotland looks like in the summer. Occasionally you get a break of a few weeks of sun, but if you are going to the Highlands expect overcast and moist weather. Thus, with ponchos shoved into day packs we stepped onboard the tour van going to Loch Ness.

Our guide was excellent. He gave us the stats on Scottish clan history in the Highlands and of course told us the lore surrounding Loch Ness. The lake is about 23 miles long. Its deepest part is 755 feet. The average depth is 433 feet. The entire lake is 52 feet above sea level. It is the second deepest lake in Scotland. Eventually it is connected to the North Sea via the Moray Firth. That connection to the North Sea is how folks believe Nessie got stuck into the Loch long ago. 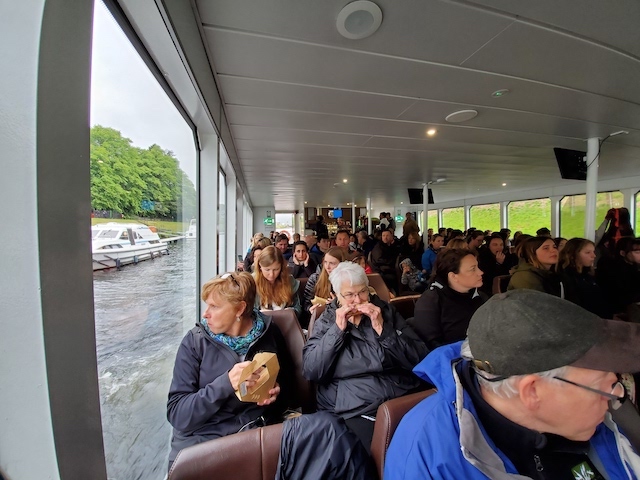 If you take a tour bus to see Loch Ness, you have to pay extra to take the boat trip up the lake. It is worth it. There are young local guides onboard who will not only tell you the stories of Nessie sightings from 565 AD to the big story break in the newspapers (some say proved as a hoax) in 1933. And they will tell you about ongoing scientific research that indicates large life forms at the bottom of the lake.

It was predictably chilly in late May, but there are windows all around so we did not need to go on deck. The boat passed old mansions on the coast. Some have been featured in TV series and some have been abandoned. The hills were green and the pink rhododendrons were in bloom. The waters were tainted with brown from the natural peat bogs in the hills. Even in the fog, the boat ride was wonderful. And if Nessie is shy that day the day you go, never fear. The boat crew has a Nessie decal on the window so you can make a video of you and the famed the monster.