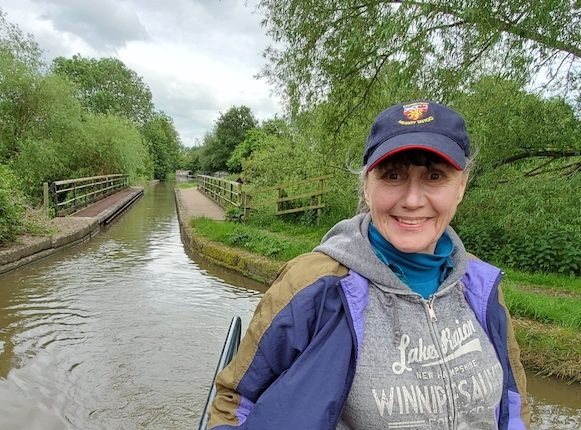 By which I mean our amazing week away on a narrowboat on the canals in the UK. It turns out my RCI (Resort Condominium International) timeshare includes an opportunity to take a boat from south of Manchester in Alvechurch, UK around to Cheshire and back. This one was on my bucket list. All the enthusiasm aside, it wasn’t all tea and crumpets.

The first thing you need to know about a narrowboat vacation is that it is not for non-swimmers or for people with knee and hip issues. Okay, in fairness if you don’t swim and you fall overboard the canal is only about 3-4 feet deep so you could just stand-up and walk to the side of the canal and hop out. A lot like if you jumped out of the boats in the Disney ride “It’s a Small World After All”, which after one go around of that song would be justifiable.

A narrowboat is about seven feet across and the lengths vary depending on how many bedrooms you need. We shoved off on a one bedroom that was 50 feet long. (They can go up to 90 feet.) It is basically a floating RV without the slide outs. The next thing to consider is that to get topside and run the thing you must negotiate steps AKA ladders from the living quarters up to the stern deck.

Bring ponchos. We went in early June and it rained half the time. June is the best time to go because it is much less crowded. We never had more than three boats in front of us at the locks, but in the summer it can be many, many more. Basically, the canals are a parking lot. Since you drive the thing from outside in the stern, which is uncovered, you will be wet. Unless, of course, you can handle a tiller, a throttle, and your umbrella all at once. It basically runs like an outboard. That is the captain’s job (and good luck turning the boat around).

The thing about the canal system in the UK is it is filled to the brim with locks. For example: The Trent and Mersey Canal is 96 miles long and has 76 locks. For us to get to and from Northwich/Alvechurch/Anderton boat lift to Cheshire, it was close to 31 locks each way. The second person (in this case me) opens a lock by jumping out of the boat and hopefully making it over the water gap to the muddy footpath. You run up to the lock and look to see if it is in use or empty. If empty, you have to manage four underwater metal gates (two on each end) and four above wooden paddle gates. The metal ones are cranked open with a bent iron shaft, like starting up a Model T.  You are winching a round gear which raises or lowers a pole notched gear. You are the motor. So, you may want to work out at the gym prior to your trip. Oh, and keep the crank away from your face. Folks along the way warned me that people have lost a jaw or at least teeth when they lost control of the handle. 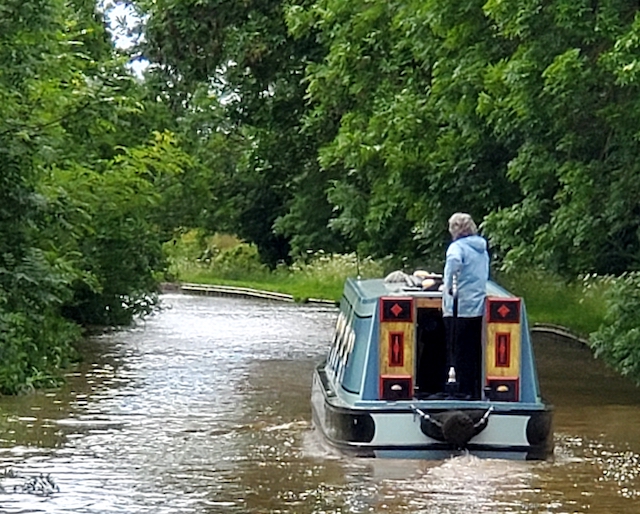 The upper wooden gates are what you see and think of as the lock. These must be opened or closed, not so much as by hand as by butt. You wait for the water to rise (or fall depending which way you are going) and you lean your butt against what looks like a fence railing sticking out into mid air about three feet from the ground. The trick, as a dear lady tried to explain it to me, is to think of it as a bath tub. To plug the bath area to lower or rise the water you must never have the front and back gates opened at the same time or “a river runs through it”.

Oh, and one more thing. The maps they give you have numbers on them with a few towns. The numbers are placed on the bridges you will go under. So not only watch your head as you go under, watch the numbers. They are your guide marks. Bon voyage.