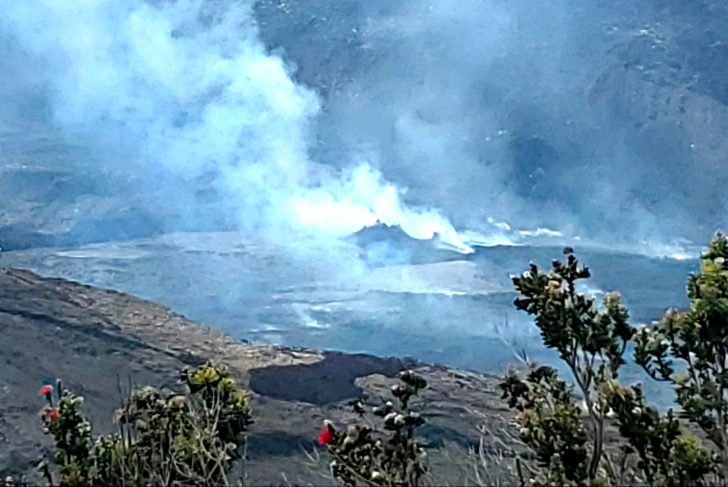 On the end of the Big Island of Hawaii is the active Kilauea Volcano. It is currently erupting at its summit. I was able to witness lava flooding the floor of the Halemaumau Crater. Granted, from my vantage point it was a mere red line in the distance of a huge wide grey flat “lake” surface. However, from a laptop connected to the Ranger’s camera we could all see a cone of red lava spewing from the earth and sliding across the lake surface. The reason that the lake did not seem red is that as soon as the lava is exposed to air it starts cooling to grey ash. FYI: this peak is 4,000 feet up and does get cold, especially at night, so wear a hat, jacket and bring water, food, and band aides—if like me, you are apt to fall on loose gravel.

Currently lava fountains are only visible from the south caldera rim (you can get there via the Old Crater Rim Drive and the hike is on the Crater Rim Trail). The night viewing shows off the red-orange glow of the lake just beneath the grey ash surface. The glowing reflects on the sides of the crater which are particularly jagged due to a collapse of the walls in 2018. You can also book a crater walk nearer to the action with Rangers, but it looked super challenging, especially miles of up-hill climbing on jagged lava rocks.

If looking into the mouth of a live volcano is on your bucket list then be sure to seek out a Park Ranger before you start hiking the 2 mile trail. The Rangers are in touch with the scientists who monitor this volcano. At this time all lava is contained within the crater. And believe me that is a good thing. Remember to bring binoculars because for safety’s sake you are a great distance from the Goddess Pele’s fireworks. Eruptions at this site can last from a day to a decade and the spewing part can move around.

Another area attraction is called the Steam Vents. Here you can see steam constantly rising up through cracks in the ground. Also, large amounts of volcanic gas are continuously being released. This is a vapor of water, carbon dioxide and sulfur dioxide. This vapor can collect and create “vog” or volcanic smog. Remember the gases of a volcano often kill people long before the lava finds them. So stay safe. I wore my Covid paper face mask.

Here are a few things I did not know about volcanoes: First off, the Big Island was formed from multiple eruptions around 30 million years ago. This left lava tubes as big as a lane in the Lincoln Tunnel. And that most land where homes are built likely have lava tubes beneath them. Think of it like giant gopher tunnels. You can walk through the Thurston Lava Tube as one of the attractions at the park.

A volcano is likely to blow it’s top if water collects under the lake of lava and turns into steam. Then it has nowhere to go but up. However, there is a more insidious problem. When the lava lake is bubbling away, it is relatively safe. But, if the lava level starts dropping it is bad news. It means the lava has found another route to the sea. Lava can shoot down old lava tubes or more likely via new fissures created by an earthquake. When this happens, lava pops up in communities downhill. Then the slowly moving molten rock burns everything in its path until it reaches the sea. The good news is that with better and better technology scientists are able to sense when there will be an eruption. Last fun fact. The volcanic rock is so porous it can generate life rather easily. I assumed all that hardened rock would never grow anything. But once the lava hardens the Ohia and Coconut Palm trees break up the cinder and start life all over again.