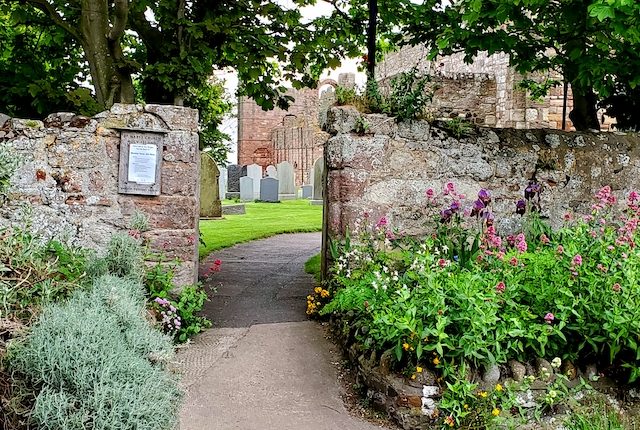 Okay, I have to admit I have always wanted to go to Mont Saint Michel ever since I saw “The Scarlet Pimpernel” with Jane Seymour and Anthony Andrews. The mad dash across the land bridge before the tide comes in was thrilling. As luck would have it, my tour to Alnwick Castle included a side trip to another such place off the coast of Northumberland, England.

Holy Island or Lindisfarne is across from Beal, England and is home to the famous Lindisfarne Priory ruins, St. Mary’s Church, and the Lindisfarne Castle that was renovated to be a single-family home. It is also home to birds, lots of birds. For example the: pale-bellied brent, pink-footed goose, wigeons, and bar-tailed godwit. It turns out the sand and mud flats that separate the mainland from the island are a great feeding place for all these birds and ducks. And of course, the place is home to 160 residents. They open up their island in the summer to over 650,000 visitors. I didn’t ask how their septic system holds up under that many guests. And you complain when the grandkids muck the place up.

The bus tour is a whirlwind of running from ruins to bluff to gardens to town for fish and chips. If you want to stay longer, and I will next time, there is: The Lindisfarne Inn, Ship Inn, Crown and Anchor, The Coastguard’s Cottage, The Owl’s Nest, and Belvue Guesthouse. You must book months in advance.

The history goes about like this; King Oswald gave the island to St. Aidan (who was sent from the Iona monks). The Irish monks followed Saint Aidan to build a priory on the island in 635 to establish Celtic Christianity in the Anglo-Saxton years. Saint Cuthbert was their most famous saint. Vikings attacked and destroyed everything and everyone. (What was their issue, really? No one ever says, “The Vikings came and exchanged cultural music.”) The monks abandoned the island around 875. In 1093 the priory was re-established as a Benedictine house. The castle was built in 1550 using stones from the priory. They did leave one stone archway of the ceiling which is now known as the Rainbow Arch. To enter the priory ruins costs about 8 pounds per adult. And as you may have noticed, there are fewer and fewer senior rates because those are the only folks left with the time and money to travel. 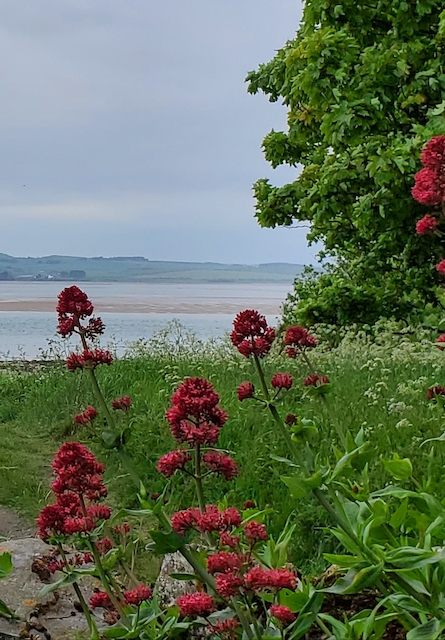 You could keep very busy for a week on this small island. There are honey farms, the ruins of the priory. The castle tours, horseback riding, hikes along wildflower bluffs and meadows and of course the pubs. But the number one fascination of Holy Island is following the actual path that the monks and pilgrims have walked for over 1,400 years. Even though the roadway was built in 1954, folks still like to roll up their pants, toss off their shoes and walk across the sand and mud flat. For this purpose, they say to get started two hours before the low tide and walk it as the tide is low and going out. Be prepared for cold water and deep mud. The walkway is marked by high poles in the sand about 40 feet from the road. As for me? I took the high road.