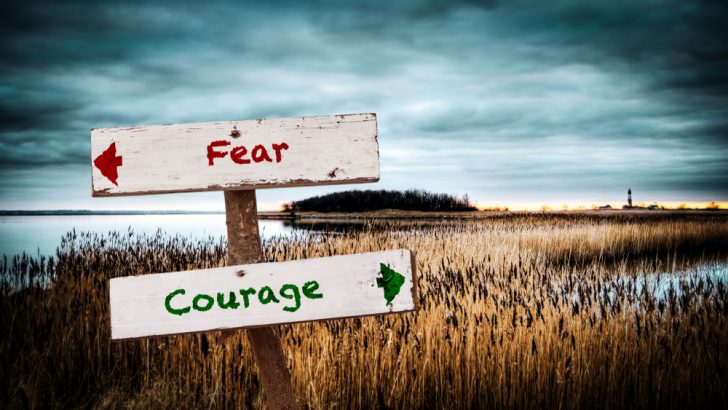 If You Want to Fail, Don’t Do What Scares You

Just thinking about doing what scares you can elevate blood pressure, increase the heart rate, tense muscles, and dilate your pupils – all signs the body is in fight, flight or freeze mode. These physical symptoms can also be signs you are on the path to growth.

Avoiding what scares you because it is uncomfortable reduces life to a smaller and smaller circle of experience. Over time, the mind atrophies from lack of use.

By contrast, each time you take a calculated risk you activate the circuits in your brain. Even the smallest change can fire up connections in your brain, such as stepping into the shower with a different foot.

Your brain learned what it knows from past experiences, just as it unlearns erroneous assumptions by new experiences. This is why reading great novels alters how you view the world, and therapy improves your relationship to yourself and others: both create new neural pathways in your brain.

Nobody likes to be scared, but when you accept discomfort as the precursor to change for the better, you can reframe fear from an enemy to an ally.

You may not know what you need, but you probably know what you want. The difference between the two is that you can get along without a want, but a need is what you must have to feel fulfilled.

For example, eating a nutritious diet meets the body’s needs, whereas eating junk food can leave you feeling queasy. Setting a boundary that preserves your energy is a sign of self-awareness, as opposed to allowing someone to take advantage of you because you want her approval.

No doubt there were times in the past when you were glad you did not get what you wanted. You fell madly in love with someone and when it didn’t work out you were crushed. A few years later you realized you didn’t even like that person.

Failure is the result of not knowing the difference between what you need and what you crave, the constant longing for what never satisfies. Painful craving, or Tanha, to use the Buddhist term, is based on human vanity, according to the late Vernon Howard, the author of The Power of Your Supermind.

Howard says the problem of craving can only be resolved by clear thinking. A mind free from the worry about what others think is like an eagle perched in peaceful contentment on a mountaintop. By contrast, Howard says craving “is a cunning thief of life force that fools you into thinking itself necessary for your existence, while all the time it steals genuine existence.”

Fictitious appetites can be recognized and ignored. When your mind obsesses about achieving an objective, stand aside and observe what’s going on, as though you were watching a movie that interests you. If you can separate yourself from the mental anguish even for a moment, you’ll experience the power of the Supermind.

The more detached you are from what you think you have to have to be important, the more you’ll see how the false self rejects, distorts, or ignores what does not agree with its limited viewpoint.

By contrast, the person you are underneath the layers of family and societal conditioning is eager for the truth because it provides understanding, as when it says to itself, “Oh, that’s why I am not succeeding.”

Maddeningly, what the false self craves is the opposite of what you need, as when you crave invitations to events even though what you need is to retreat from the world to restore mental and physical balance. However, as soon as you withdraw, the false self tells you that competitors are outdoing you, or that you are being antisocial.

Howard cites mystics throughout the ages who experienced the bliss that follows release from the torment of craving. Strangely enough, he says, we fear the very quietness we seek.

“Desire only what is truly necessary,” Howard writes. “But there is where we must throw every ounce of insight into the battle. We must distinguish between real and false needs. Otherwise we condemn ourselves to the butterfly life, forever flittering and never resting.”

A Passion for Understanding

Rather than trying to escape from what scares you, Howard suggests you have a passion for understanding it. Most of the time, you’ll discover the fear is coming from the conflict between the self that pushes you to do what you don’t want to do, and the self that wants to be honest.

The false self knows if you ever break free from the craving for external validation, that will be the end of your paying attention to anything it has to say.  Structures you once thought permanent will fall away, replaced by structures that reflect what you really need to be content.

Keep in mind that understanding is not just knowledge, as when you know where a place is on the globe and its history. Understanding is knowledge plus the ability to empathize with any situation. Shakespeare had knowledge, but it was his empathy for the human condition – the dark as well as the light – ­that allowed him to create characters that became archetypes.

The Scariest Risk You’ll Ever Take

Discarding an outmoded identity can be the scariest risk you’ll ever take. But the positive outcome is worth the anxiety the process provokes. As a way to transition from an outmoded view of yourself to who you are at this stage in your life, pretend you are an actor auditioning for the role of your false self.

To get the job, you have to be motivated by vanity (the part of you who says things like, “If I had this, then I would look good in the eyes of others.”). How do you convince the audience that this is who you are? How will you dress and walk? What will you do and say? What will you never do or say? Who are the supporting actors surrounding this false self?

Now set aside the false self’s craving for approval for the moment. Imagine you are an actor auditioning for the role of who you are. To get this job, you have to be motivated by self-respect, personal worth, and autonomy.

How do you convince the audience that this is who you are? How will you dress and walk? What will you do and say? What will you never do or say? Who are the supporting actors surrounding this self?

Up until now, your identity may have been based on a script you wrote a long time ago, based on the supporting (and some non-supportive) actors in your earlier life. To change this picture of yourself, do something you normally would not do, such as asking for support or guidance from someone whose life demonstrates self-respect, personal worth, and autonomy. By being vulnerable with this person you will rewire your brain, the first step to writing a script that ends in success.

Nancy Anderson is a career and life consultant based in the Sacramento/San Francisco Bay Area. She is also the author of the bestselling career guide, Work with Passion, How to Do What You Love for a Living, and Work with Passion in Midlife and Beyond, Reach Your Full Potential and Make the Money You Need. Nancy’s website is workwithpassion.com.