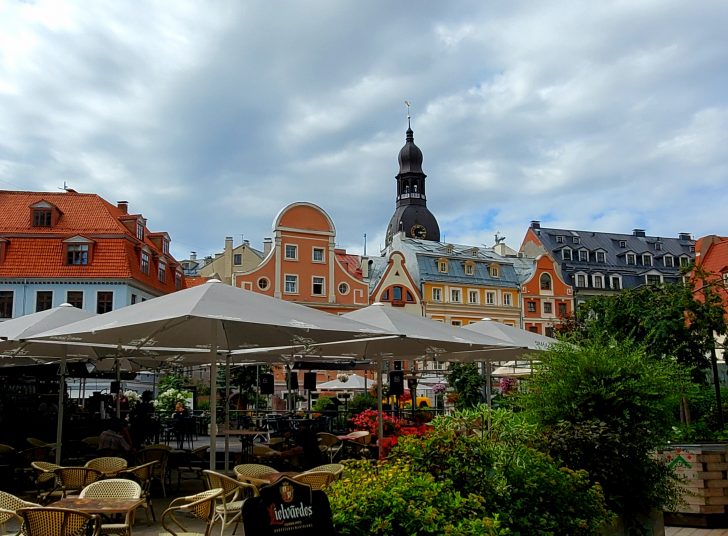 My top and bottom line on Old Town Riga is that it has now replaced both Copenhagen and Barcelona as my favorite cities. Riga simply blew me away. Apparently, the European Union loaned Latvia billions to restore the Old Town and it has become a favorite for locals and tourists alike.

From the clock tower area, you proceed toward the four large Zeppelin hangers relocated from a manufacturing area outside of Riga and cut down a bit to fit, although they are at least 3 stories high inside.

This is the home of the Riga Central Market. 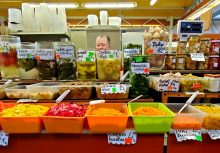 One hanger for cheeses, one for vegetables, one for fish and meat, a few bakeries in between and outside a bazaar with rows and rows of small shops for clothing, hats, shoes, scarves, you name it. It is a shopper and a photographer’s delight. Although many of the merchants are camera shy and a few are camera belligerent. The good news is that there are stacks of bins stuffed with colorful food. Peppers, melons, Goudas, raspberries, bread right from the stone oven. The tricky part is saving any edible goodies. It somehow disappears on the train ride home.

Not only does the Daugava run through Riga, but so does the quietly meandering Pilsetas kanals (canals). Boat rides are available on both the canal and the Daugava. From beyond the market is the Old Town. I like to take a boat ride in a new city and also, I recommend the Hop-on-Hop-Off-Bus, although I rarely hop off. These are highly informative, come with a map so you can get orientated. The best thing is can mark off all the places you want to go back to on foot.

One of my first areas I circled was the Opera House and the park along the canal. There are several coffee shops in this area. From there on to the Esplanade at the corner of Elizabeth iela and Brivibas iela is the Riga Nativity of Christ Orthodox Cathedral. It has an ornate brick pattern on all the exterior walls. The many domed spires are covered in gold. The interior is just elaborate.

In the heart of town is The Freedom Monument. Latvia University is also in Old Town. You will find St. Peter’s church on Reformacijas Laukums road. It is a huge church with a massive spire absolutely jam packed into a small area with historical buildings all around. Walk all around the church to find more and more alleys to get lost in. Another wonderful building is the House of Black Heads. In the plaza in front of the House of Black Heads is a commemoration of the first Christmas tree on public lands (at least in Latvia). The building is named for the guild of the Brotherhood of Blackheads for unmarried merchants, shipowners and foreigners. Though it was bombed to ruins in WWII, it was rebuilt between 1996-1999. The literature says this is the place the President resided while the Riga palace on the river was being restored. It is currently a museum.

The restaurants in Old Town are lovely. Be prepared for lots of Latvian food: chicken K-bobs, borscht, cabbage, pickles, and fried fish. There are also several wonderful chocolate stores and penny candy type stores. There are gifts shops, lots. And wonderfully restored facades on old hotels, banks, and schools.

There are many small parks inside Old Town. My favorite fountain and garden area is across from the Opera House. There are benches all around and just enough cool mist to feel a few degrees cooler. Between walking, eating and taking photos an entire day passes quickly. If you only have one day to see Old Town stay between the canal and the Daugava and below K. Valdemara iela (street). You will have about 10 blocks by 12 blocks. The area you want is Vecriga. Bring Euros. Have fun.