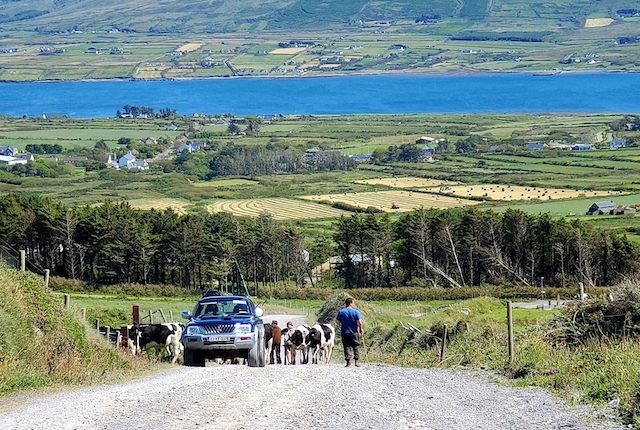 Click here and here to read the first two installments in this series.


Ireland’s famous Ring of Kerry Road is worth the drive. We head to Valentia Island. First stop is the Visitor Centre with a lovely café, gift shop, and a wonderful movie on the history of a very famous island offshore. From the top of Valentia Island, you can see Skellig Michael Island (on the right in photo below). It is home to an old stone monastery with clochán or beehive huts, oratories, and crosses as well as garden terraces built in 558 AD. Twelve monks at a time lived on this remote rock island living off fish, birds, eggs, milk, and vegetables. They felt that the higher up they lived the closer they were to God. Tragically, the high peaks also made them visible from the sea. They were ransacked for their meager belongings by Vikings between 795 and 839 AD. 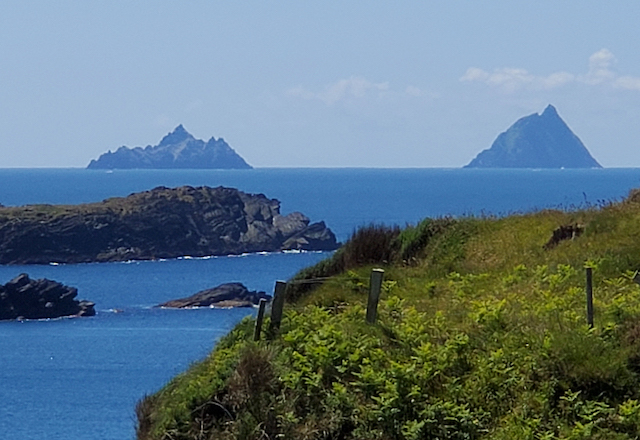 After 100 years of unprecedented Atlantic storms, the monks finally left in the 12th Century. But they took pilgrims there on retreats thereafter. The island is almost 12 kilometers off the coast of County Kerry. It was used in recent Star Wars movies as the place an old Luke Sky Walker lives as a hermit.

If you want to catch a boat ride to climb Skellig Michael, book months in advance. It costs about $10 to hold a spot. Some people will book three days in a row because the boats will only go out in good weather. Those who are determined to get on the boat on a nice day would rather lose $20 in booking fees than miss the chance to walk where Sky Walker walked.

Valentia Island has a moment in history as the connection point of the first transatlantic cable in 1858. 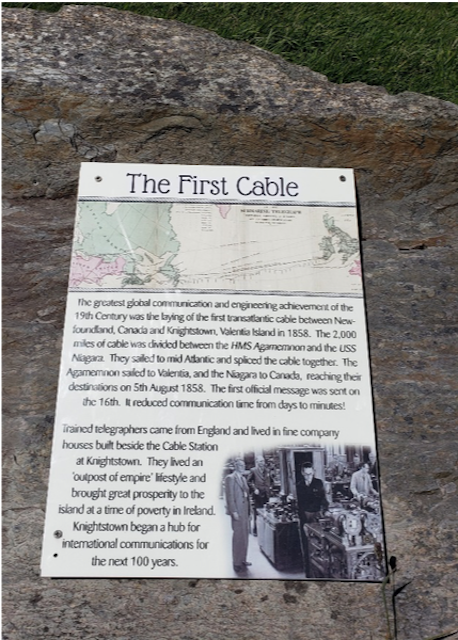 The other side was in Newfoundland. The single village on Valentia, Knightstown, which is only a bridge away from mainland Ireland, became famous and wealthy at a time when Ireland was struggling. It remained the hub of transatlantic communications for 100 years. The rest of the island has been left to be fairly wild. The only traffic jams are with cows and other tourists. But the first traffic jam was with tetrapods. These land walking fish left their trail in the mud for all to see right on Valentia Island. 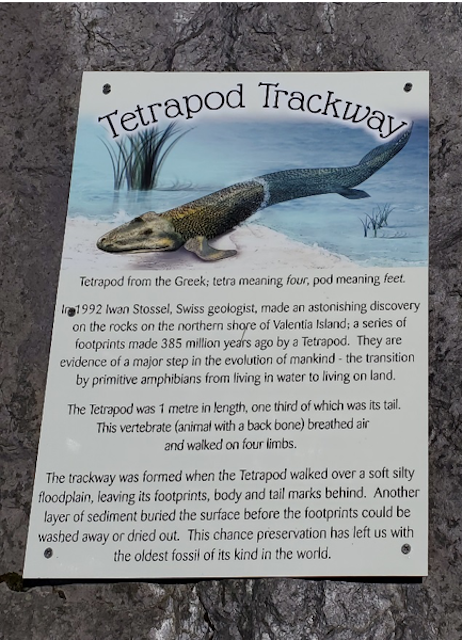 There are many larger than life stories about the 188 High Kings of Ireland. Valentia Island was once said to be a rock that was thrown from Dingle by King Oscar. And if you wanted to be in the Fianna, the elite force guarding the king, there were a few rules. You had to recite 12 books of poetry, defend yourself against the spears of nine warriors, leap over a stick as high as yourself, and take a thorn from your foot while running, to name but a few. Good skills for today, except the nine spears are more likely to come from Twitter. Valentia Island has a secret on the hillsides. There you can find the Spotted Orchid, the Cotton Flower, and the ever elusive Scarlet Pimpernel. 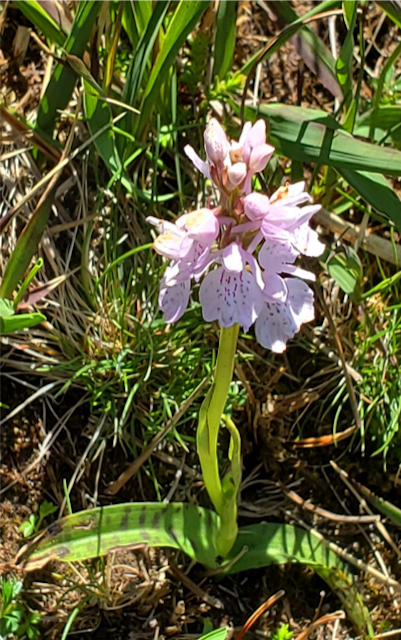 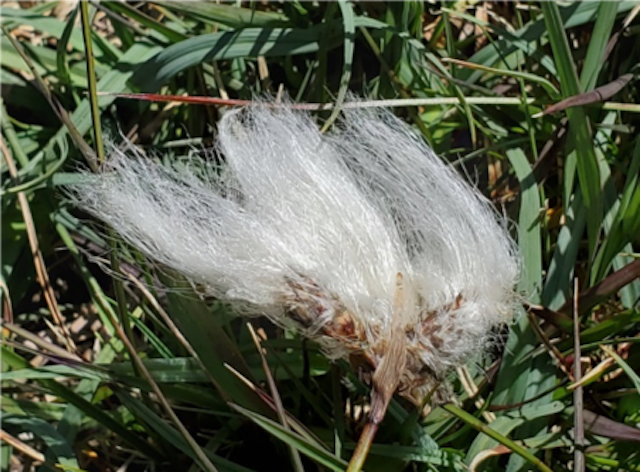 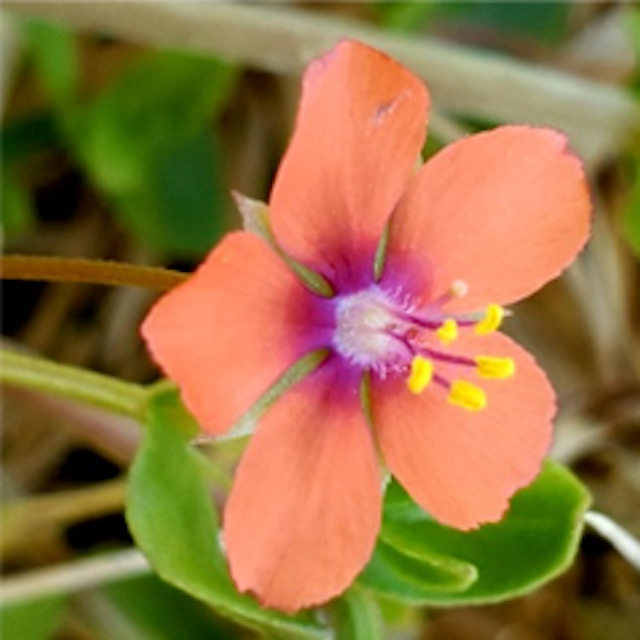 Early on, Ring Forts were built for security. They are scattered all over the hills. There are even small cave-like rooms inside the walls. One of the best examples is Staigue Fort built as protection for a local lord. The time of construction is placed between the Bronze Age and 300 A.D. No mortar was used. It was hand hewn and fitted. It’s about four to six meters thick and 30 meters in diameter. The entrance faces south. The assumption is it was an astronomical observatory with stunning views of Kenmare Bay. It’s a bit of a trek off the main road, but worth it. 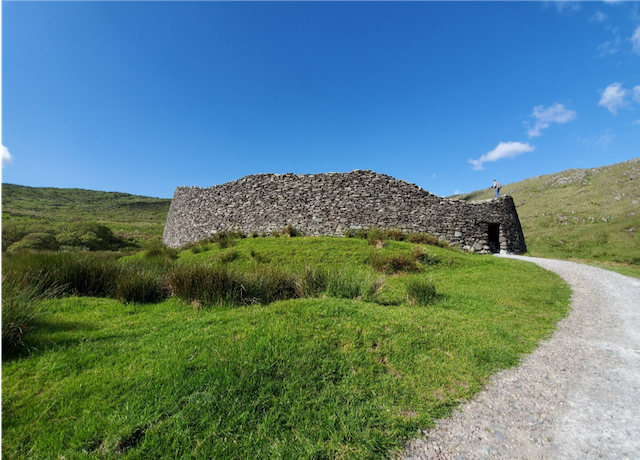 Everywhere you go in Ireland are emerald fields, wild flowers and ancient ruins. The sheep appear to be the victims of gang wars because they are sprayed (tagged-up) with colorful paint. Which I assume washes out. It is at least a great deal kinder, especially for lambs, than branding. 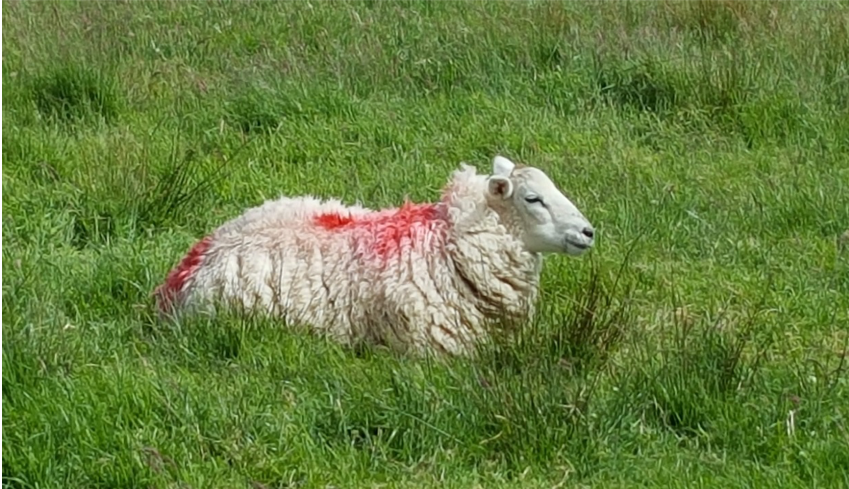 As we end our adventures and day draws nigh, consider the colors of the wide-wide sky. Sunrise with morning dew. Bright noon to golden hues. Sunset and evening stars. How truly blessed we really are. 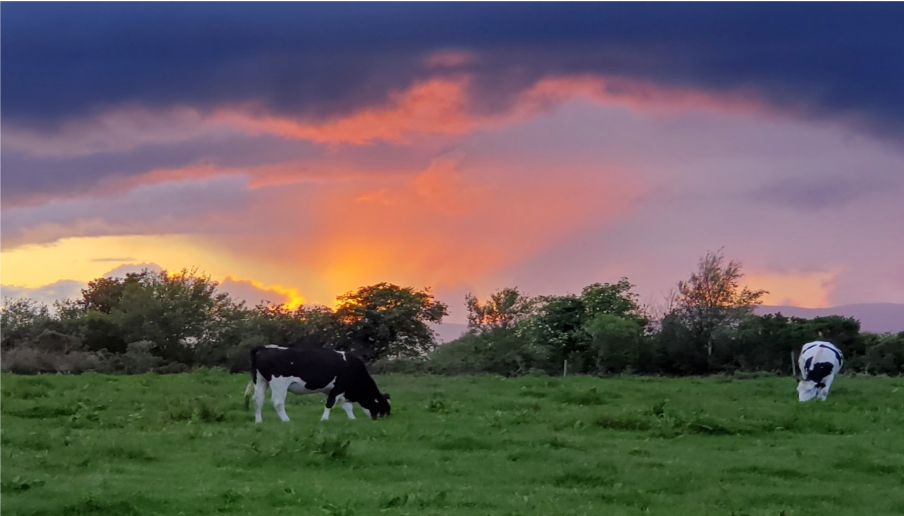