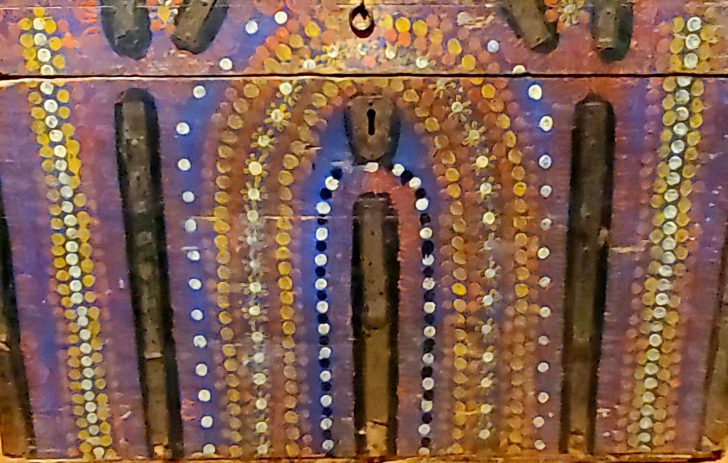 Riga has the Daugava River running right through it. This river is an intricate waterways system of streams and lakes which allowed for trade and entire fishing villages to thrive. The lakes range in size, but all are connected to the Daugava through streams. These lakes include Kiezers Lake, Mazais Baltezers, Lielais Baltezers, Sunisu-ezers and Lake Juagas where we find the Latvian Ethnographic Open Air Museum. All the lakes around Riga are crowded in the summertime because the water is cool, clean and accessible, at least by car.

The Latvian Ethnographic Open Air Museum is an intentional collection of entire villages from the four main provinces of Latvia: Kurzeme, Vidzeme, Zengale and Lategate with its Russian Old Believers sect.

The villages are actual dwellings that have been moved to this sanctuary. Placed on Lake Jugas it offers a look into fishing, hunting and shipping communities. This includes a mesmerizing huge two-story high barn filled with Hope Chests of young women who were coming to the lake port in search of love. The massive collection of Hope Chests were all hand painted, each by the bride-to-be. As such some are intricate Turkish designs, some are accomplished pastural scenes, others delicate florals and some…sort of stick figures. I am guessing that either the beginner-level artists were likely too young to be doing this massive move in life or not at all interested in being shipped off to a lake village, let alone be responsible for a public art installation.

Each community had a church with either Scandinavian influence, Baltic or Russian orthodox architecture. Most villages had windmills, community gathering halls and private cottages. All the cottages had extensive vegetable and flower gardens. Often there are artisans who will demonstrate weaving, churning or baking. I found a lovely wooden tee-pee shaped structure with the walls completely out of vertical logs about 4 inches on diameter. Inside there was a fire pit with stones. This was the sauna house for the village. 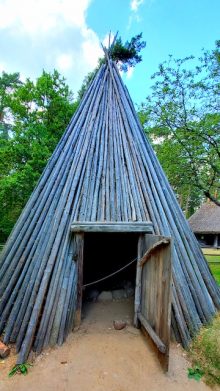 We arrived late in the day so most of the activity and re-enactors were closing up shop. However, down by the lake there was a small café. And what a meal! I know I make travel a lot about food, but sitting on a rough-hewn lakeside picnic table under large over arching trees I took my “take-out-meal” and sat down to revel in the beet borscht my taste buds have ever encountered. 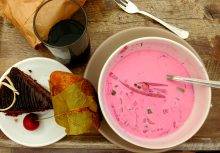 It was comprised of gently chopped tender cooked shredded beets, cabbage, possibly apple, vinegar and vegetable stock. It was hot so the generous dollop of cool sour cream on top was amazing. This came with a huge side of rye bread toasted sticks (rupjmaize or kiegelitis—meaning little brick) slathered with roasted garlic and butter then toasted hard like Italian bread sticks hard and then salted. It made great dipping paddles to mix the sour cream into the beets to turn the entire dish into a deep soothing magenta. I had hoped to try their chicken k-bobs, but the soup was a massive meal.

From there we wandered up to a massive old windmill with huge arms ready for sails. Then we clamored down a rather steep set of stairs to find the fourth village. There were boat builders, weavers, farmers and of course the religious order. If you want to see the influences over Latvian culture this is a lovely one stop shop, albeit outside.