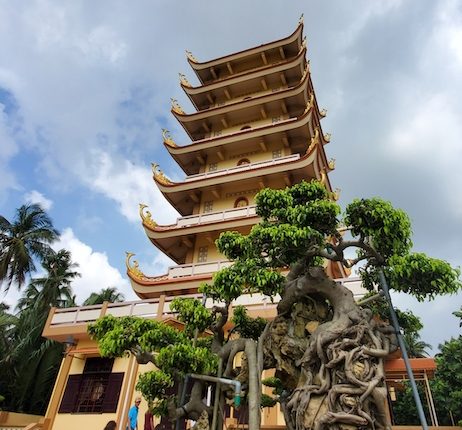 On a plot of land two hectares large, in the village of My Hoa, in the city of My Phong, on the banks of the Bao Dinh canal, in the south of Vietnam is a shrine. The glorious Vinh Trang Chua Buddhist temple. It is on the way to My Thoa on the Mekong Delta.

The Vinh Tran Pagoda is a trip worth taking. There are three enormous (house size) Buddhas:

One standing (Amitabha—the Buddha of bliss and compassion). 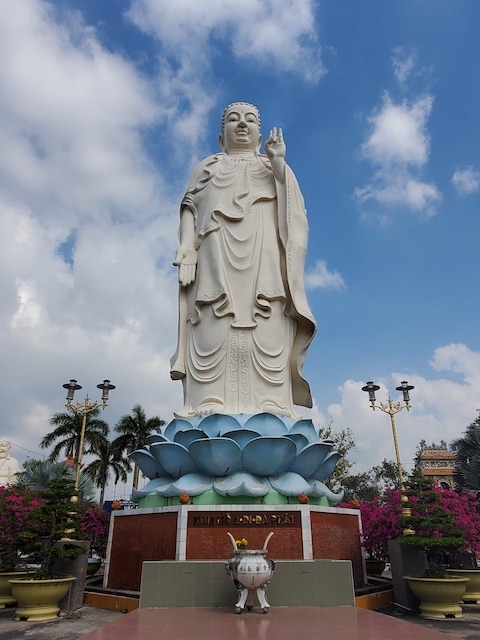 One sleeping (Gautama Buddha). The sleeping one represents one who has died and reached parinirvana. Which sounds like Nirvana lite. 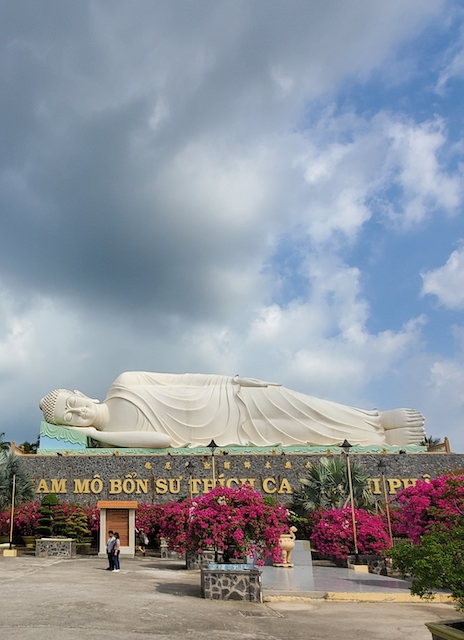 The third one (Bodai Buddha), is smiling so much it makes you want to laugh. The smiling Buddha has dimples, a cleft chin, and perfect teeth. Did I mention

I know very little about the Buddhist faith? But if laughing out loud until your stomach jiggles is a profession of faith, I like it. It is said that the happy Buddha has become an international sign of good luck. Sure, unless he comes to dinner. That puppy must devour food like a combine going through Kansas. 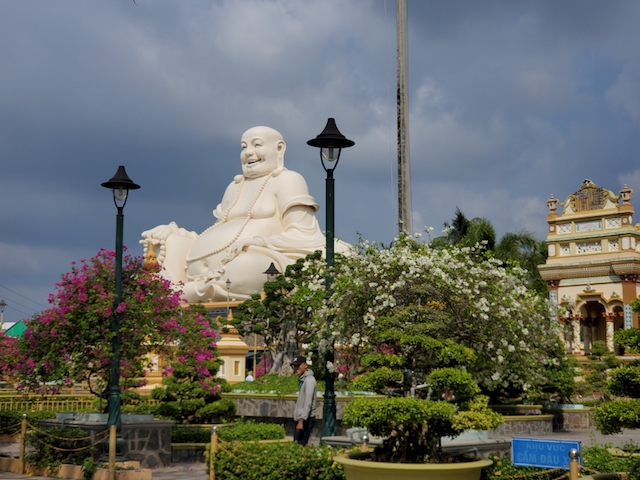 The Buddhas are out on the grounds surrounded by a reflecting pool and lavish gardens. Within these grounds are potted ancient trees that have a Bonsai look to them as their branches are trained with wires. Tucked here and there are miniature figurines and houses. Rather a like a Smurf Village, but not blue.

There are also both a temple structure and a pagoda. On the first floor of the pagoda there are large temple bells that a monk was busy chanting about and ringing. In the corner was a bell anyone could ring with a baton thingy on a rope. Chanting was optional. There are four Buddhas in the lower floor. One riding what can only be described (at least by me) as a cat dragon. These are more lifesize (because we all have seen real dragons before) and likely wood carvings that have been painted. There are flower offerings with incense. 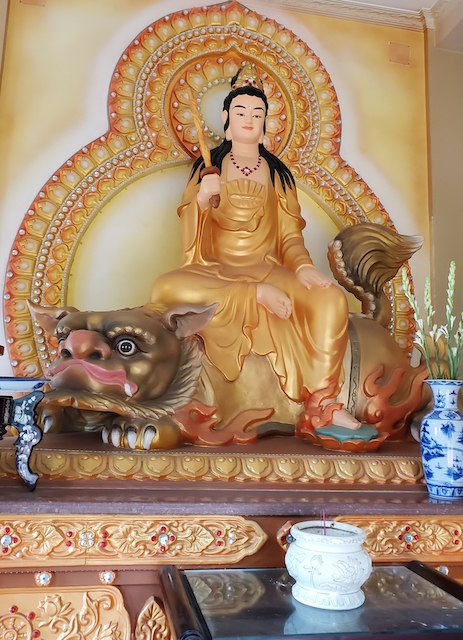 The temple shrine is an eclectic blend of East and West styles of architecture. There are Renaissance patterns and Romanesque arches. There are Japanese tiles and Vietnamese architectural influences. It looks like a white and gold wedding cake with never-ending frosting details. The temple is also used as a burial ground for past caretakers. This practice of honoring past caretakers extends to the simple farmers who put burial shrines in their rice paddies to remember the past owners of the land. These days the monks who care for the temple and pagoda also run a home for children with disabilities, orphans, and other needy children. The entire area was recognized as a national historical and cultural relic in 1984.  It really is an excellent example of all things Vietnamese.