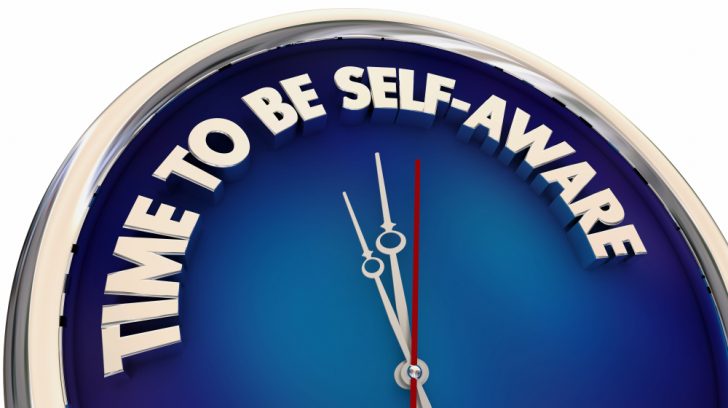 Self-awareness requires extraordinary alertness. When the mind is quiet you can observe without conditioned thought, as when you watch a beautiful sunrise, or when you do the work that absorbs you. Then there are no distractions; there is just you in communion with where you are.

The moments when you connect with what you are doing offer the best opportunity to catch yourself being yourself. You are not thinking of who you should be, or what you ought to be doing. Nor are you comparing yourself to others, or worrying about what others think of you. You are a content adult focused on what is important to you.

Doing what you want to do sounds simple. And it is. But it is a struggle when fear and self-doubt work against you. Internal conflict about whether you will succeed at what you want to do is usually the result of scars left over from the paternal relationship, since the father (ideally) represents authority: the guide for how to make it in the world.

As an example of how an authority complex works, a child inside of you may still be in need of approval from a father figure who was absent, alcoholic, abusive or competitive with you.

The child’s bond to an insecure father undermines confidence. Essentially, you are still in thrall to his power over the child you were. Put another way, it is the idealized image of him that blocks your own sense of power.

Until you see the father as he is, not as you wanted him to be, you get in demoralizing power struggles with people who remind you of him. Or you attract bosses, clients and customers that stir up feelings of inadequacy.

People in positions of power who lack competence, humility, wisdom and generosity are examples of the missing father syndrome that is so prevalent in our society.

Becoming Your Own Father

Becoming your own father means you have internalized an ability to set goals you can reach, given your talent, interests and skills. When you find yourself in a challenging situation you ask for help from someone whose life demonstrates they know what they are doing.

The desire to master life accelerates in the second half of life, when values undergo a radical change. The difference between the morning and afternoon of life is a shift in focus from the need for group approval (the first group being the family) to spiritual values.

Carl Jung described the search for meaning in his essay on the difference between him and Freud (Modern Man in Search of a Soul). Jung’s practice was primarily composed of older people who felt stuck, their description of psychic standstill.  Many of these patients’ parents were still alive.

After working for decades with patients mired in the malaise of meaninglessness Jung concluded, “It is being caught in the old resentments against parents and relations and in the boring emotional tangles of the family situation that most often brings about the damming up of the energies of life.”

The only way out of biological bondage (as opposed to genuine bonds of love) to our parents and our offspring is through taking a spiritual leap, Jung observed, the intuitive recognition that we are souls on a journey through life, unattached and free.

“We moderns are faced with the necessity of rediscovering the life of the spirit, we must experience it anew for ourselves,” Jung said.

Jung was talking about the often solitary, gut-wrenching time in the wilderness most of us want to avoid. The alternative is to remain in permanent childhood, bound by the dictates of authority figures we hate, worship or copy. And many do remain in the past; witness the state of the world.

Becoming a self-sustaining adult is the work of the second half of life. Subduing the demons in the unconscious with the light of understanding eventually leads to what psychologists call differentiation, a solid sense of self.

For Buddhists, letting go of attachment is the end of suffering. Eckhart Tolle describes release from the ego’s negative narrative as awakening: finding the light of the soul within the self.  Jesus called spiritual confidence the peace that passes all understanding.

The Hell of Not Knowing

Who am I and what am I supposed to do with the remainder of my life can be answered when you know what you feel as well as what you think. As mentioned above, there is nothing wrong with you when you experience analysis paralysis. After all, you were brought up in a society that values thinking over feeling, with good reason.

Logical thinking brought humankind out of the dark ages and into the Age of Enlightenment. The ability to think critically set humans free from superstition and emotional excess.

The advent of the industrial revolution and technology only increased reliance on the thinking side of the brain, to the point where over thinking is the norm, provoking the anxiety that troubles so many people.

For example, it has been said that people in the Middle Ages experienced the same amount of stress in one year that you experience in one day. And yet you have the same brain.

When feeling and thinking are both mature, and this balance takes a great deal of hard work, you set the pace of your life. Slowing down helps you to separate assumptions from reality. You may need professional help to sort fact from fiction. But even with help, be prepared for resistance to living a healthy, sane life.

The Many Forms of Resistance

Resistance is a black hole that drains the life out of you. You feel immobilized, as though you are caught in a magnetic energy field. Resistance rears its head whenever you initiate any change, or when change comes at you from outside of you.

Neuroscientists attribute resistance to the lizard brain at the back of the skull, the built-in fear of the new (it has to be worse, not better). Not until the new proves to work (the last stage of change) will the lizard brain quiet down. So don’t expect it to cooperate. Just soothe it with perseverance.

Resistance will also come from the child in you that clings to the belief that parental figures hold all the power. Accepting responsibility feels like a loss of innocence to this inner child, and it is. But putting on the mantle of power is a huge gain for your adult self, and your world.

Since forewarned is forearmed, here are forms of resistance that arise when you initiate change:

To counter resistance, make a list of habits that are the opposite of the above forms of resistance. Here are a few examples: I set boundaries that allow me to do what I want.   I let go of what keeps me stuck in the past. I am open to the unknown. I ask for help from people who are where I want to be.

Practicing new behaviors every day will speed up your journey through the wilderness.  Once these habits lock in place the oasis of healthy living is just ahead.