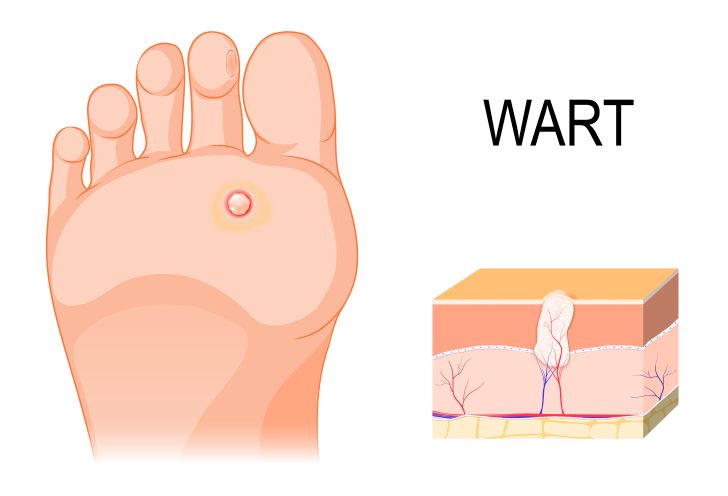 Common Types of Warts and What to Do About Them

Warts can be a nuisance, and sometimes painful, but they are usually harmless. These small, non-cancerous skin growths occur from a virus that infects the top layer of skin. Though usually not serious, the virus is contagious, which can cause warts to spread.

Most warts eventually disappear without treatment. But many people choose to have warts removed because they find them bothersome, or have concerns about their appearance or spreading.”What are the most common types of warts?There are several different types of warts. The kind you have depends on what it looks like and where it appears on your body.Common warts, also called verruca vulgaris, have specific traits. They usually:

What causes warts?The virus that causes warts is called human papillomavirus (HPV). It can spread more easily through a cut or break in the skin, which causes an infection. Children are more prone to getting warts because they often get cuts and scrapes. Warts also commonly appear where people shave, such as on their face or legs.It’s also common for people with autoimmune disease or a weakened immune system to get warts because they are predisposed to the virus that causes them.Warts can easily spread from one place on the body to another, or from one person to another. You can get a wart from touching someone’s wart or from touching something the wart touched, such as a towel or doorknob.It may take a few months for you to notice a wart developing after coming in contact with one.What are the symptoms of a wart?Warts, in general, can vary in appearance. They may be:

The symptoms of warts can resemble symptoms of other health conditions, so be sure to see a board-certified dermatologist for a diagnosis. How are warts treated?Many warts go away without treatment, especially in children. But some warts can be stubborn. If you have a weakened immune system, warts can be hard to get rid of.Some people find over-the-counter or home treatments effective for warts. But if you have a wart that hurts, is bothersome, or is spreading, it’s time to see a dermatologist.To diagnose a wart, the doctor may:

Treatment for warts depends on the type of wart, as well as age and overall health. The treatment will focus on destroying the wart, fighting the virus, or both.The doctor may suggest:

What outcome can I expect?It may take several weeks or months for treatment to begin working on the warts. But even with treatment, you may find your warts begin to spread or come back. It may seem they return as quickly as the old ones disappear. They may appear in the same spot or in a new spot on the skin.This is because the virus that caused the wart entered your skin before you had treatment, causing new warts to grow. The best defense is to get any new warts treated as soon as you notice them.”

Denise Gallo, APRN, is a board-certified nurse practitioner with SkinCare Physicians of Fairfield County, a division of Advanced Dermatology, PC.