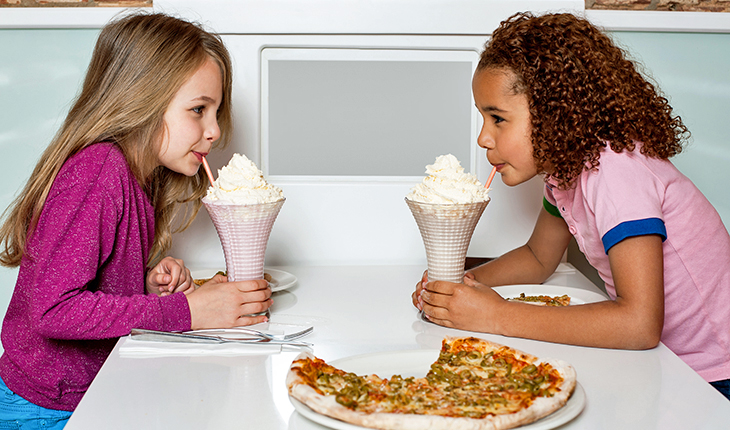 Seventy-four percent of children still get unhealthy drinks or side items when their parents buy them “kids’ meals” at the four largest restaurant chains, a new study shows.

The finding, part of a report from the Rudd Center for Food Policy and Obesity at the University of Connecticut, analyzed meals bought at McDonald’s, Burger King, Wendy’s and Subway.

“If restaurants are serious about children’s health, they will make the healthiest choice the easiest choice for parents and the most appealing choice for children,” said Jennifer Harris, Director of Marketing Initiatives for the UConn Rudd Center, and lead author of the report.

The study asked approximately 800 parents in 2010, 2013, and 2016 about what they ordered for their 2- to 11-year-old child in the past week from one of the top four fast-food restaurants. Sixty-one percent of those surveyed were mothers aged 25-40, and most had two or more children aged 2-11 years.

Since 2010, the four largest fast-food restaurant chains have pledged to offer healthier drinks and side options in kids’ meals, and not list sugary soda as a kids’ meal option on menu boards. A previous UConn Rudd Center study conducted in 2016 found wide variation in how well individual restaurant locations fulfilled those commitments.

Study authors say restaurants should automatically provide healthy drinks and sides as the default choices with kids’ meals and point to the need for regulations that would mandate those policies. The state of California, several cities and counties there, and cities like Baltimore, Md., have all passed policies requiring restaurants to offer healthier drinks as the automatic option with kids’ meals, and New York City, Washington, DC, and others are considering similar legislation. In Louisville, Ky., legislation was recently enacted requiring healthier drinks as well as fruit, vegetables, whole grain, or lean protein as part of a kids’ meal. Subway is the only fast-food restaurant studied that voluntarily includes only healthier side and drink options with kids’ meals in their restaurants nationwide.

In 2016, 91 percent of parents reported purchasing lunch or dinner for their child in the past week at one of the four largest chains, up from 79 percent in 2010. Families visited McDonald’s the most.

Study authors say low cost and/or increased value of fast-food meals, convenience and easy access, and a documented increase in fast-food advertising to children could account for the increase in consumption of fast food meals.

“We know that fast food offers parents a convenient, affordable option for feeding their families. But restaurants have a responsibility to make these affordable, convenient foods healthier. Most fast-food meals–even kids’ meals–have more fat, sugar, and sodium than children need, and eating this kind of unhealthy food can have negative health consequences over time, such as obesity, diabetes, heart disease, and other health issues,” said Harris.

Other 2016 findings in the report include:

Nearly all parents responded positively to healthier kids’ meal policies at the specific restaurant they visited and said the policy would make them purchase food for their child at that restaurant more often.

One-third of parents who bought lunch or dinner for their child at a fast-food restaurant did not purchase a kids’ meal, and this was true for both younger children (ages 2-5) and older children (ages 6-11). They purchased regular menu items, which include adult-sized portions and tend to be less nutritious than kids’ meal items.

In general, parents are purchasing healthier options for their younger children (ages 2-5) than for older kids (ages 6-11) at fast-food restaurants.

Some restaurants have implemented new practices that add on extra fat, sugar, and calories, such as providing desserts with kids’ meals (some Dairy Queen and some Subway locations), or offering a dessert in place of a kids’ meal toy (some Burger King locations).

“Given parents’ positive attitudes about kids’ meal policies, and how often families are visiting these restaurants today, fast-food companies have a substantial marketing opportunity to better promote the healthier options inside their restaurants,” said Harris.

“They should also make more meaningful changes on the menu. Fast-food restaurants have said they want to be part of the solution to childhood obesity. They can start by making the healthier drinks and sides the default options in kids’ meals and introducing healthier kids’ meal main dishes, which remain high in fat, sodium, and calories,” she said.