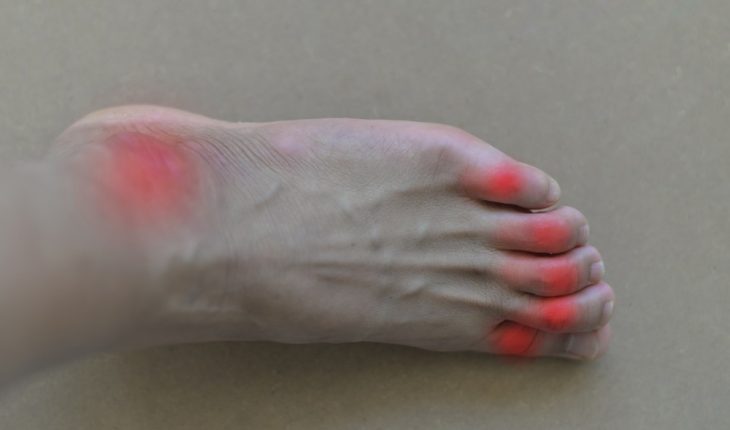 Genetics, Not Diet, Seen as A Major Factor in Gout

Although gout is widely perceived as being caused by diet, new evidence suggests that a more important factor is genes in the development of high serum (blood) urate levels.

The study was published in The BMJ.

Gout, a joint disease that causes extreme pain and swelling,  is most common in men aged 40 and older. It’s caused by excess uric acid in the blood (known as hyperuricaemia) which forms crystals that collect around the joints.

For centuries, diet has been seen as a risk factor for the development of gout. Recent studies suggest that certain foods (eg. meat, shellfish, alcohol and sugary soft drinks) are associated with a higher risk of gout, while others (eg. fruit, vegetables, low-fat dairy products and coffee) have a protective effect. Studies also show that genetic factors play an important role.

To better understand how both diet and genes might influence the development of gout, a team of researchers based in New Zealand analyzed dietary survey data for 8,414 men and 8,346 women of European ancestry from five US cohort studies.

Participants were aged over 18 without kidney disease or gout, and were not taking urate-lowering or diuretic drugs.

Blood urate measurements and genetic profiles were recorded. Factors that could have affected the results, such as sex, age, body mass index, daily calorie intake, education, exercise levels, and smoking status, were also taken into account.

However, each of these foods explained less than 1% of variation in urate levels.

The researchers point to some limitations, such as the use of different food questionnaires between studies, and the fact that the study was limited to individuals of European ancestry without gout, so the findings may not be generalizable to other populations or to people with gout.

Nevertheless, they say their data “are important in showing the relative contributions of overall diet and inherited genetic factors to the population variance of serum urate levels.”

They conclude: “Our data challenge widely held community perceptions that hyperuricaemia is primarily caused by diet, showing for the first time that genetic variants have a much greater contribution to hyperuricaemia than dietary exposure.”

In a linked editorial, researchers at Keel University point out that people with gout often experience stigma from the misconception that it is a self-inflicted condition caused by unhealthy lifestyle habits and, as a result, are often reluctant to seek medical help.

This study, they say, “provides important evidence that much of patients’ preponderance to hyperuricaemia and gout is non-modifiable, countering these harmful but well-established views and practices and providing an opportunity to address these serious barriers to reducing the burden of this common and easily treatable condition.”