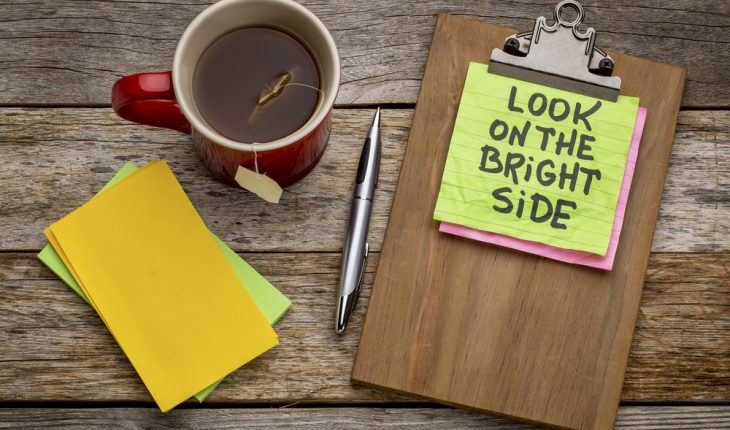 Looking on the Bright Side May Reduce Anxiety, Especially When Money Is Tight

Editor’s note: As Monty Python taught us in Spamalot, “Always Look on the Bright Side of Life“.

Trying to find something good in a bad situation appears to be particularly effective in reducing anxiety the less money a person makes, possibly because people with low incomes have less control over their environment, according to research published by the American Psychological Association in 2018

“Our research shows that socioeconomic status has a powerful effect on whether reframing a situation can reduce anxiety, both in the short term and the long term,” said Claudia Haase, PhD, of Northwestern University and co-author of the study. “As social inequality continues to rise, it becomes increasingly important that we understand how emotional regulation strategies might benefit mental health across the socioeconomic spectrum.”

The research was published in the journal Emotion.

Haase and her colleagues used data from an experiment and a national survey to analyze the role of income in what the authors called cognitive reappraisal strategies, where an individual attempts to regulate his or her emotions (thereby reducing anxiety) by reconsidering, reframing or gaining a new perspective on past or anticipated experiences.

“After a romantic breakup, for example, you might be afraid of being lonely,” said lead author Emily Hittner, MA, a PhD candidate, also from Northwestern. “You could use cognitive reappraisal to manage this fear by telling yourself that now is a great time to get to know yourself better, discover new passions, rekindle old friendships and have space to find a more fulfilling relationship.”

The researchers first conducted a laboratory-based experiment involving 112 married spouses. Participants were asked to watch a short film designed to upset them (e.g., an excerpt from a movie in which a mother learns of the death of her two daughters) and were instructed that if they felt any negative emotions, to try to think about or reframe the situation in such a way that they experienced fewer negative emotions. They were also asked to report on whether they used reappraisal strategies in their daily lives and on their annual income using a scale of one (less than $20,000 per year) to seven (more than $150,000 per year).

Participants from lower socioeconomic strata who reappraised more said they felt less anxious, but this was not the case for middle- or upper-income participants.

The researchers also analyzed data from Midlife in the United States, a national telephone survey funded by the National Institute on Aging involving more than 2,000 participants interviewed in the mid-1990s and again nine years later. As part of both surveys, respondents answered a series of questions designed to measure the extent to which they engaged in reappraisal strategies and to measure their anxiety levels. People who said they used reappraisal strategies reported decreases in anxiety nearly a decade later, but once again, this was only true for those with lower incomes.

In both experiments, cognitive reappraisal started to lose its effectiveness when incomes rose above $35,000 per year.

Haase believes these findings may have something to do with a person’s control over external factors. People who make more money may have more control over their environment, and therefore may be better off changing the situation itself rather than their take on it.

“Individuals with lower incomes, though, have less access to resources to directly change a stressful situation they may find themselves in,” she said. “For that reason, they may find it more effective to deal with anxiety by reframing the situation.”

Cognitive reappraisal is one element of cognitive behavioral therapy, which is one of the most common types of psychotherapy used to treat anxiety disorders, but not the only element, Hittner noted. While further research needs to be done to confirm, people from higher socioeconomic backgrounds might find better results using other strategies where they put their resources to work to change situations for the better, she said.