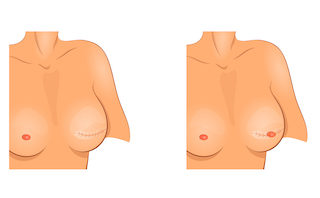 Putting a New Nipple on a Reconstructed Breast

Breast reconstruction can also be performed either via breast implants or with a woman’s own natural tissue. Using her own tissue to fashion a new breast, a procedure known as “autologous reconstruction,” results in a soft, warm, natural breast that is sometimes difficult to distinguish from a woman’s original breast, especially when a woman has had a nipple-sparing mastectomy. For women who cannot undergo nipple-sparing mastectomy, it is possible to reconstruct the nipple-areola complex. Having a new breast with a nipple is important to many women. Reconstructing the nipple-areola complex completes the sense of restoration that helps some women put cancer behind them.

Women who are considering a mastectomy that preserves the nipple-areola complex must be evaluated to ensure that there is no tumor tissue near the nipple and no symptoms such as discharge that might indicate the presence of disease in the nipple itself. Those who are not candidates for nipple-preserving surgery can consider nipple reconstruction, which folds and sutures a flap of skin from the surrounding breast tissue to form a mound in the shape of a nipple. Nipple reconstruction typically also requires tattooing several months after surgery to add color to the healed reconstructed nipples.

For women who would like to bypass surgical nipple reconstruction, there are also tattoo artists who specialize in tattooing the nipple-areola complex directly on the breast mound. This less invasive procedure has become increasingly popular as the techniques have become increasingly sophisticated, even creating a realistic three-dimensional effect.

3-D tattooing may be performed in the surgeon’s office or by a trained tattoo artist in a shop or specialized medical center. It is generally performed several months after breast reconstruction surgery when surgical scars are completely healed.

While a nipple tattoo cannot create an actual projection, a high-quality, detailed tattoo, designed for each woman, can appear to have dimension as well as the shading, shadows, and coloration of a natural nipple. The practitioner consults with each patient to determine how to best match the nipple to her skin tone and to create the appearance she wants. The inks used are mixed to create the best color for each woman. When the tattoo is to be applied to only one breast, it can be designed to match the appearance of her natural breast. Depending on how much sensation a woman has in her reconstructed breast, the tattooing procedure may be completely painless or may be performed with a local anesthetic. Healing takes a week to ten days.

The results achieved with prosthetic nipples can be truly impressive. For women who aren’t candidates for a nipple-preserving mastectomy or who want to avoid the additional surgery of nipple reconstruction, a prosthetic nipple is a straightforward, non-invasive procedure that completes the breast reconstruction that restores a woman’s self-image as she moves confidently forward.