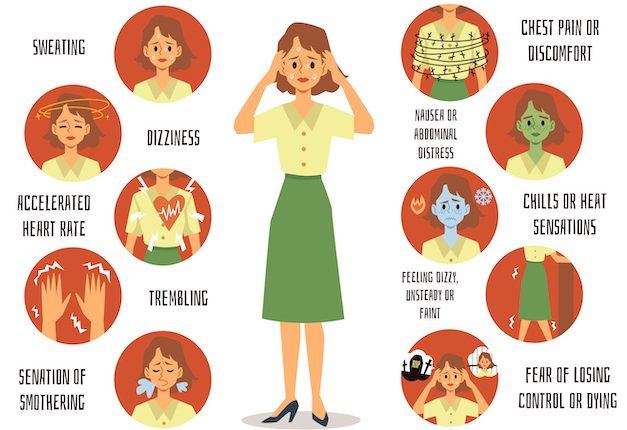 A panic attack is a sudden, intense episode of fear or dread accompanied by physical symptoms such as pounding heart, sweating, trembling or shaking, lightheadedness, feeling faint, shortness of breath, choking sensations, nausea, abdominal distress, chest pain, cold and hot chills, numbness and tingling, feelings of being detached or things seeming unreal. Individuals with panic disorder fear that they are going to die, go crazy, or lose control. They then begin to fear getting future attacks and will often change their behaviors to ward off panic attacks; a disorder called agoraphobia.

The first thing to remember is that a panic attack is an emotional alarm that is meant to protect us not harm us. Panic attacks, although unpleasant to experience, are not dangerous.

Panic attacks usually begin right after a stressful life event so focus on dealing with the stress you are under rather than trying to stop the panic attack. Deep, slow breathing exercises (slow, diaphragmatic breathing) that helps regulate oxygen and carbon dioxide can be calming and may be helpful to do regularly as a way of calming your over-anxious state in general. However, it is wise not to use it to stop a panic that you are afraid to have in the moment as it likely won’t work anyway and it will also inadvertently convince your brain that you are in danger.

It is best to first to go to a medical doctor when you have your first attack to make sure it isn’t anything like a thyroid condition etc. Once the doctor rules out any physical basis for panic attacks, it is best to not keep going back and taking unnecessary medical tests over and over again. Cognitive-behavioral therapy (CBT) has been shown to be effective in treating panic disorder and agoraphobia. First, individuals are educated about panic attacks and the physical symptoms of anxiety and fear that are experienced.  Second, they are trained on how examine and change their unhelpful thoughts and beliefs that lead to panic attacks in real time.In addition, individuals are trained to reduce physical tension, and are then exposed to physical sensations of panic and to feared and avoided situations and sensations until the person realizes they are not dangerous. Repeated exposure helps to reduce the fear induced by these situations and teaches the person that the sensations experienced are not dangerous.When the fear of the physical sensations is reduced, future panic attacks are reduced.

Lata K. McGinn, PhD is a licensed clinical psychologist and co-founder of Cognitive Behavioral Consultants. She is also a tenured Professor of Psychology, Director of the Doctoral Clinical Program, and Director of the University-based Cognitive Behavior Therapy Training Program for Anxiety and Depressive Disorders at the Ferkauf Graduate School of Psychology, Yeshiva University/Albert Einstein College of Medicine.

Dr. McGinn presents her research worldwide and is regularly invited to conduct keynotes, lectures, seminars and workshops throughout the world to professionals, consumers, schools, agencies, and companies. Her research focuses on vulnerability and prevention of anxiety and depressive disorders. She has recently developed an intervention to prevent the development of depression and has tested the efficacy of this intervention in a NIH funded research study.

CBC is a clinical and training center comprised of internationally recognized mental health professionals who have researched, pioneered, and are highly experienced in delivering cutting edge evidence-based treatments that help adults, adolescents, and children live more fulfilled lives. Founded in 2004 by Drs. Lata K. McGinn and Alec L. Miller, leaders in the fields of Cognitive Behavioral Therapy and Dialectical Behavioral Therapy, the CBC team provides a large array of Clinical and Wellness services to the public, provides Custom Designed Programs for schools, agencies, and businesses, and conducts Continuing Education for Professionals in the field of psychology throughout the year. More information can be found at www.cbc-psychology.com