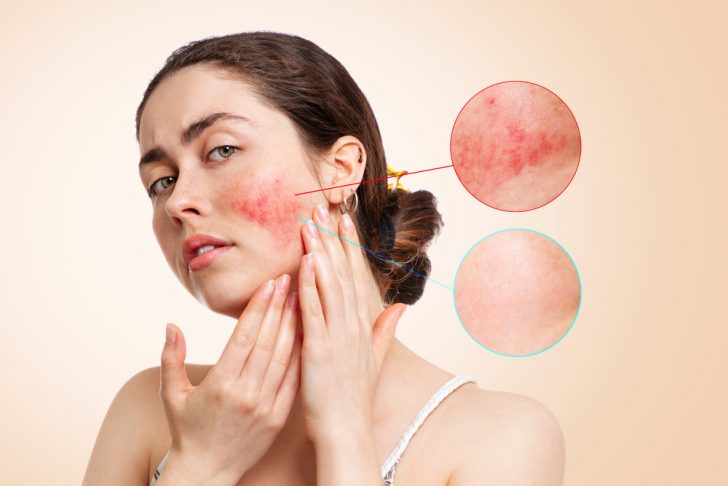 Rosacea is a common, chronic disorder of the facial skin that’s often characterized by flare-ups and remissions. Although the potentially serious disorder affects an estimated 16 million Americans, experts say many don’t know it.

Here, from the National Rosacea Society (NRS), is what you need to know about the condition:

Rosacea typically begins at any time after age 30 as an intermittently appearing, flushing or redness on the cheeks, nose, chin or forehead. Over time, the redness tends to become ruddier and more persistent, and small blood vessels may appear in the affected area. Without treatment, bumps and pimples often develop, and in severe cases the nose may become swollen from excess tissue. In around half of patients, the organization says, the eyes are also affected. They can feel irritated and appear watery or bloodshot.

But sophisticated new therapies designed to target rosacea’s disease processes, combined with treatment plans tailored to patients’ specific cases, have made it easier than ever for people to achieve clear skin.

“Rosacea may feel like an uphill battle – left untreated, the disease is a moving target, with varying signs and symptoms that may improve but often get worse, both in response to triggers and over time,” said Dr. Hilary Baldwin, associate professor of dermatology at Rutgers Robert Wood Johnson Medical School. “The good news is that there are more treatment options available than ever before, allowing physicians and patients to work together to find the most effective treatment for each individual case.”

While once conventionally divided into four subtypes, rosacea is now understood as a single disease with a wide variety of appearances. Although its clinical features, or phenotypes, may appear at different times and in varying combinations, scientific research indicates they may all be manifestations of the same underlying inflammatory continuum. For example, one study noted that combining topical brimonidine with ivermectin from the start of treatment resulted in clearer skin than using brimonidine onl.

Moreover, optimal therapy may also keep the disease from progressing further over the long term, Baldwin noted. Though more studies are needed, some medications appeared to improve baseline redness over time, and may possibly help inhibit progression as well as help maintain remission.

The best results are achieved when patients and their doctors work together to identify appropriate therapy and monitor its progress, Dr. Baldwin said. In initially designing a treatment plan, she recommended that physicians take a comprehensive history of the patient’s experiences with rosacea, including its signs and symptoms over time, as well as its social, emotional and psychological effects. Doctors should also offer advice on trigger factors, as well as information on skin care and sun protection.

As therapies progresses, physicians may wish to offer additional strategies. For example, oxymetazoline and brimonidine are topical treatments that act on different receptors in different ways, Baldwin said. With the patient’s observation of its effects, physicians may suggest adjustments, such as application in different amounts at different times of day, to achieve the best result.

“Managing rosacea isn’t a single visit to the doctor, but an ongoing process, and for some patients it may take weeks or months to see improvement,” Baldwin said. “But patients are not alone. Fortunately, with today’s increasingly sophisticated tools, individuals partnering with their physicians can lead normal lives not negatively impacted by rosacea.”

The NRS maintains a website (click here).  The site contains news, information and patient materials, including “Understanding Rosacea,” an educational booklet that provides an overview of the disorder, its potential causes and treatment; “Recognizing Redness,” a pamphlet that includes a redness register to allow patients to gauge relative redness before and after flare-ups or treatment; Rosacea Review, a newsletter for rosacea patients; a “Rosacea Diary” to help patients identify and avoid lifestyle and environmental factors that may trigger flare-ups in their individual cases; and other booklets to help patients understand, manage and cope with their condition.