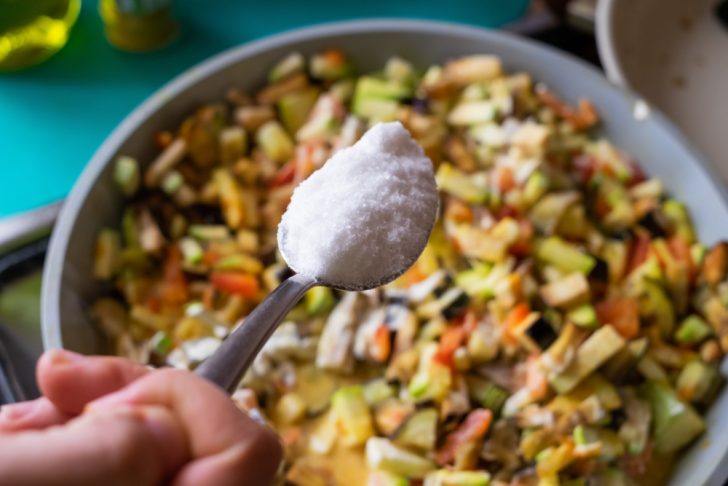 Did you know that “salt” and “sodium” are not the same thing, even though they’re often used interchangeably? Sodium, a mineral, is one of the elements found in salt. Salt is where most of your sodium comes from.

The federal Food and Drug Administration (FDA) is working to make sure people have greater access to healthier foods and easy-to-understand nutrition information to make healthier choices. One way to do that is to make it easier for you and your family to eat less sodium.

Because about 70% of the sodium you eat comes from processed (packaged) foods and restaurant foods, the FDA is working closely with industry, asking manufacturers to gradually lower sodium across a wide range of foods. This will result in more food choices with less sodium.

You and your family can also take steps to ease into reducing the amount of salt—and therefore, sodium—you eat. The recommended limit for sodium is 2,300 milligrams (mg) per day for people 14 years and older. But, the FDA says in a Consumer Update, people in the U.S. consume 3,400 mg per day on average!

Too much sodium can lead to high blood pressure, a leading cause of heart disease and stroke. Ninety percent of American adults are eating more sodium than is recommended. While more than 4 in 10 Americans have high blood pressure, in non-Hispanic Black adults that number increases to almost 6 in 10.

Moreover, children and adolescents are also eating too much sodium. Evidence shows that children who eat foods higher in sodium can carry those eating habits into adulthood.

Steps You Can Take to Reduce Sodium

Try to cut back on foods high in sodium, such as deli-meat sandwiches, pizza, burritos and tacos. Remember, it’s important to cut back both when eating at home and eating out in restaurants. If you’re ordering a standard menu item at a chain restaurant, ask to see the written nutrition information and choose a lower-sodium option.

Compare products. Before you buy, check the Nutrition Facts label to compare the sodium content of packaged products (there’s a fair amount of variety among similar foods). For example, data collected by the FDA shows that breads can vary from 300 mg to 700 mg of salt per 100 grams of bread. The FDA’s material on the Nutrition Facts Label is regularly updated; click here to find out more

Expand your spice horizons. Try no-salt seasoning blends and herbs and spices instead of salt to add flavor to your food.

For additional information, please visit the FDA’s Sodium in Your Diet.