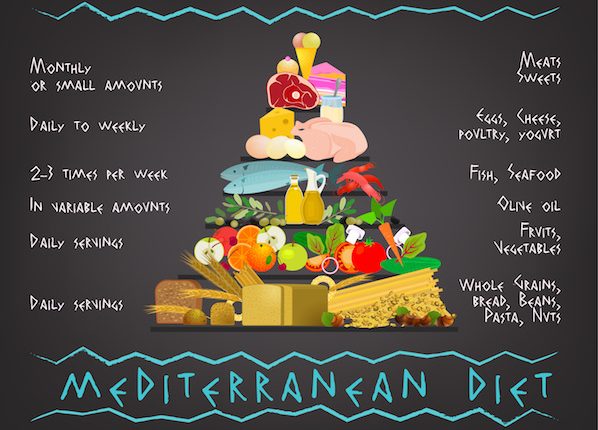 You Are Never Too Old for the Mediterranean Diet

The Mediterranean diet is a secret of long life for elderly. These are the conclusions of a study by the Department of Epidemiology and Prevention of the I.R.C.C.S. Neuromed, in Molise, Italy, published in August 2018 the British Journal of Nutrition. Researchers analyzed the relationship between the traditional Mediterranean diet and mortality in a sample of more than 5,000 people over 65 years of age participating in the Moli-sani Study and followed-up for 8 years.

A release from the institute notes that in addition to data from the Moli-sani Study participants, Italian researchers also analyzed other epidemiological studies published in several Countries, for a total of 12,000 subjects. Results clearly indicate that the Mediterranean diet is an authentic life-saving shield, able to significantly reduce the risk of mortality in elderly people. This effect is maintained despite the Mediterranean diet has changed considerably over the years, with pantries full of supermarket products and with a lifestyle very different from the one followed by original Mediterranean farmers.

The release quotes Marialaura Bonaccio, epidemiologist at the Department and first author of the study, as saying, “The novelty of our research is to have focused our attention on a population over 65 years old. We already knew that the Mediterranean diet is able to reduce the risk of mortality in the general population, but we did not know whether it would be the same specifically for elderly people. Now data from Moli-sani Study clearly show that a traditional Mediterranean-like diet, (rich in fruit, vegetables, fish, pulses, olive oil and cereals, low in meat and dairy products, with moderate wine consumption during meals), is associated with 25% reduction of all-cause mortality. This effect remains also if we consider specifically cardiovascular or cerebrovascular mortality.”

“Besides data from the Moli-sani populations, explains Licia Iacoviello, head of the Laboratory of Molecular and Nutritional Epidemiology at Neuromed Institute and professor at the University of Insubria, Varese, we analyzed the results from six other studies conducted on people aged over 65 in other Countries, involving a total of twelve thousand people. Through the technique of meta-analysis, we could confirm that a higher adherence to the Mediterranean diet lowers overall mortality risk in a dose-response, progressive, way. In other words, the more you follow the Mediterranean diet, the greater the gain in terms of mortality risk reduction”.

The foods that, in the context of a Mediterranean-type dietary model, are able to offer greater protection, include a high consumption of monounsaturated fats (widely present in extra virgin olive oil) and fish, but also a moderate consumption of alcohol, preferably during meals.

“Our research considers nutrition as a whole, but it is still interesting to understand which foods mainly contribute to the ‘driving’ effect of the Mediterranean diet, explains Bonaccio. Our data confirm what has already been observed in numerous epidemiological and metabolic studies, namely that a moderate consumption of alcoholic beverages, if inserted in a Mediterranean food context, is a protective factor for our health “.

“We think that our data launch an important message in terms of public health”, says Giovanni de Gaetano, director of the Department. “With the progressive aging of the world population, we know that, in a few years, people over 65 will represent about a quarter of Europeans. It is therefore necessary to study and identify those modifiable factors that can guarantee not only a long lifespan, but also an acceptable quality of life. We use to say that we must add life to years, not just years to life. Our study is a robust basis to encourage a healthy diet model inspired by the principles of the Mediterranean diet, even among older people.”