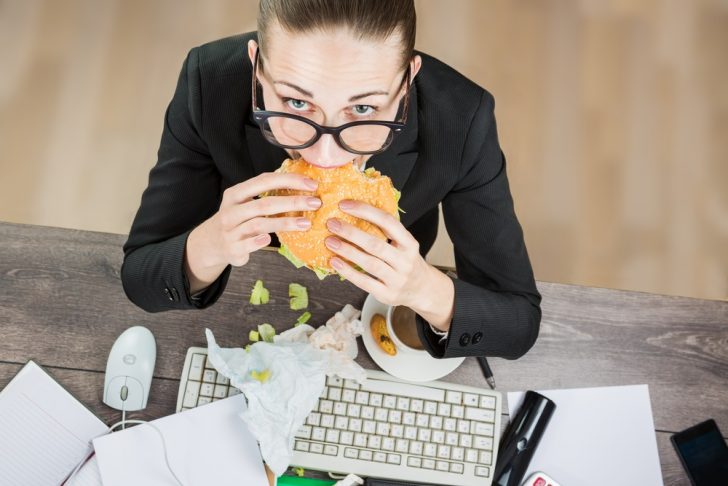 Pulled from a brown bag, yanked from a microwave in the middle of a shift or nabbed from a bland cafeteria between meetings, it’s more associated with frustration than nutrition.

A recent online survey by the Harris Poll for the American Heart Association (AHA) and the food service company Aramark put numbers on that frustration: More than half of workers said they struggled to make lunch healthy, and 91% were interested in making their work lunches healthier.

People can find many ways to do that, said Maya Vadiveloo, assistant professor of nutrition and food sciences at the University of Rhode Island in Kingston. And solutions can involve not just workers, but the places that serve them.

You should start by knowing that lunch is “tremendously important,” said Vadiveloo, a member of the AHA’s Council on Lifestyle and Cardiometabolic Health.

“We all have a certain amount of calories that we need each day to keep our bodies feeling energized and to get the nutrition that we need. And there are only so many times in the day when you can do that.”

Given that most people don’t consume vegetables at breakfast, lunch is an important opportunity to get in the recommended minimum five servings a day.

But that’s easier said than done. If you have only 15 minutes to eat between tasks, you’re probably not building a balanced meal, Vadiveloo said. And then there’s the appeal of what’s usually offered at a company cafeteria or fast-food eatery.

“There are a lot of really sad-looking salad bars,” she said. And those salads might be competing for attention in a place that’s “pumping out bread aroma and giving pizza samples and other things that are both very caloric and very appealing and inexpensive and fairly filling.”

Cost is an issue for many people as well, said Vadiveloo, who has studied the effects of adding healthy menu options at a worksite cafeteria. Such options tend to be more expensive.

“And the reality is, if you’re spending $5 to $7 on a salad, you’re probably not getting the most satisfying salad, and you’re going to be hungry shortly thereafter.”

Meanwhile, the sub shop around the corner will throw in chips and a sugary soda as part of a combo meal and add a giant cookie for 50 cents extra. What can a hard-working, health-conscious employee do?

Brown-bagging offers one of the best ways to be in control of your diet, she said. “I pack my lunch almost every day. I have a sandwich, some vegetables – not usually a salad. And a fruit, and a low-sugar, plain-ish yogurt for later.” She’s a believer in preparing meals ahead of time, so healthy food is ready to grab. “Think about what you’re going to be consuming for the week. If you’re getting carrots ready, you can make five bags of carrots. Or have five apples ready to go.”

If you’re dedicated to dining out daily, thinking ahead can still help.

If you’re not yet the brown-bag type, Vadiveloo suggests starting by bringing in your own fruits or veggies. Use them as sides to sidestep those calorie-jammed combo meals.

If you’re dedicated to dining out daily, thinking ahead can still help. If you know you’re always going to eat at the same nearby places, she suggests visiting when you’re not buying to scout out healthy options, and plan to order them. Research indicates people are better at making healthy choices when they aren’t agitated by hunger.

So, tell yourself, “‘Tomorrow, when I go to Chipotle, I’m going to order a salad bowl instead of a thousand-calorie burrito.’ Having a plan ahead of time for how you’re going to respond to a particular food environment can at least partly automate that more complex decision,” she said.

Another approach: Take advantage of restaurants that let you order ahead, well before the cravings kick in. “Temptation is always higher when we’re hungry,” she said. Make selections that include at least a serving of vegetables, ideally some sort of fruit, some whole grains when possible and a lean protein.

People should also advocate for better food environments, Vadiveloo said. In the 2017 study she led about the worksite cafeteria, which was at Harvard University, researchers developed and taste-tested recipes to make them healthier but still appealing.

The burden to eat right can’t always be put entirely on individuals, Vadiveloo said, “because you might only have a warm bag of carrots or a wilted salad right now as your options.”

The rewards of all this effort? You might live longer. And you might even have more energy for your work, and everything else. “Maybe not the first day that you try – or if you do it’s probably placebo. But over time, when people adopt healthier diets, they feel better.”

This story courtesy of American Heart Association News. To find out more about heart issues and the agency’s work, click here.