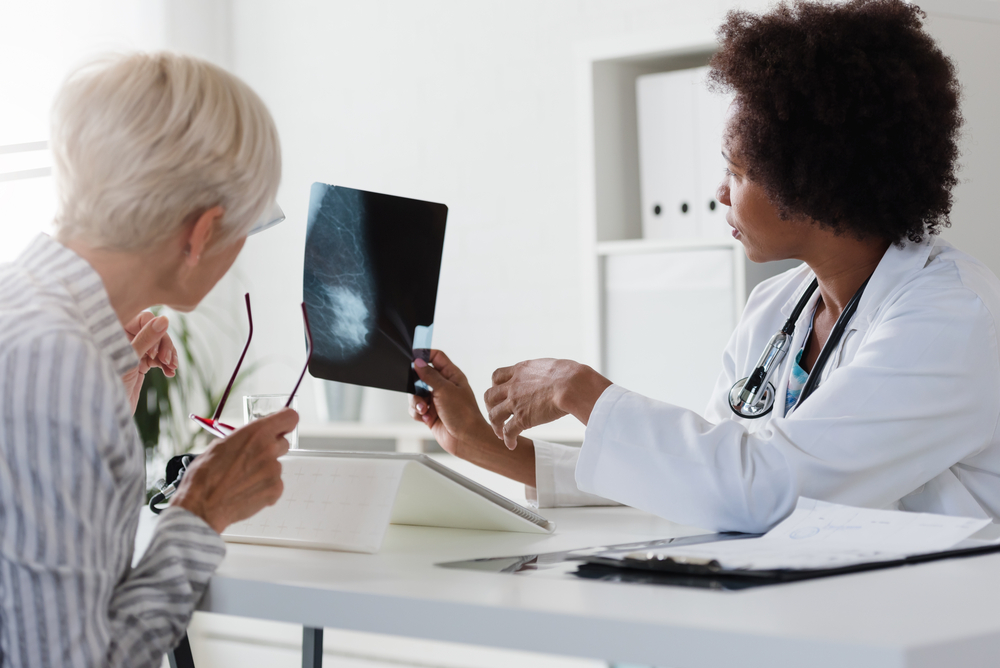 The Breast-Cancer Factor in Heart Disease

Breast arterial calcification, calcium build-up within the middle layer of the breast’s arterial wall, is related to aging, Type 2 diabetes, high blood pressure and inflammation, and is a marker of stiffening in the arteries. It is not the same as calcification of the inner layer of the arteries (the layer that is in contact with the blood), which is typically found in people who smoke or those with high cholesterol levels. Breast arterial calcification is a common finding that shows up as white areas in the breast’s arteries on a mammogram however, it is not thought to be related to cancer.

“In an earlier study of this same research group, we reported that among women ages 60 to 79, 26% of the women had breast arterial calcification, and the percentage increased with age to more than half of women having evidence of the finding between ages 75 to 79 years,” said the study’s lead author Carlos Iribarren, M.D., M.P.H., Ph.D., a research scientist at the Kaiser Permanente Northern California Division of Research in Oakland, California. “Research has confirmed the calculators we currently use to assess an individual’s 10-year risk of developing cardiovascular disease are not as accurate in women as they are in men. In our current study, we evaluated if breast arterial calcification, which can be easily seen on a mammogram, provides more information about a woman’s risk of developing heart disease.”

In this study, researchers reviewed health records on a subset of more than 5,000 women selected from among more than 200,000 women who underwent screening mammograms as part of MINERVA (MultIethNic study of brEast aRterial calcium gradation and cardioVAscular disease), a large, racially and ethnically diverse cohort of postmenopausal women. Participants of the current study were actively enrolled in the same health insurance plan, were between the ages of 60-79 years and received at least one regular screening with digital mammography at one of nine facilities of Kaiser Permanente of Northern California between October 24, 2012 and February 13, 2015. The women had no prior history of cardiovascular disease or breast cancer. Researchers assessed the women’s overall health and followed them through their electronic health records for about 6.5 years after the mammogram to find which women had a heart attack or stroke or developed other types of cardiovascular disease, such as heart failure.

Women with breast arterial calcification were 23% more likely to develop any type of cardiovascular disease, including heart disease, stroke, heart failure and diseases of the peripheral arteries.

Iribarren also noted that there would be no added cost or extra radiation exposure for women because the U.S. Preventive Services Task Force (USPSTF) recommends women ages 50-74 years have a mammogram every two years, and for women ages 40-49 years, mammography may be considered for the early diagnosis of breast cancer based on individual risks and as advised by a physician. Mammography screenings, timed according to USPSTF’s guidelines, are covered as a preventive service with no copayment by most health insurance providers including Medicare, Medicaid and private insurance companies, as required by the Affordable Care Act.

Cardiovascular disease followed by cancer are the top two causes of death among U.S. women, according to the American Heart Association’s Heart and Stroke Statistical Update 2022. However, in the U.S., more women report worrying about their risk for breast cancer than heart disease, and only half of women are even aware that heart disease is the leading cause of death in women, according to Natalie A. Cameron, M.D., and Sadiya S. Khan, M.D., M.Sc., FAHA, co-authors of an accompanying editorial for this study, also publishing today in March 2022 in  Circulation: Cardiovascular Imaging.