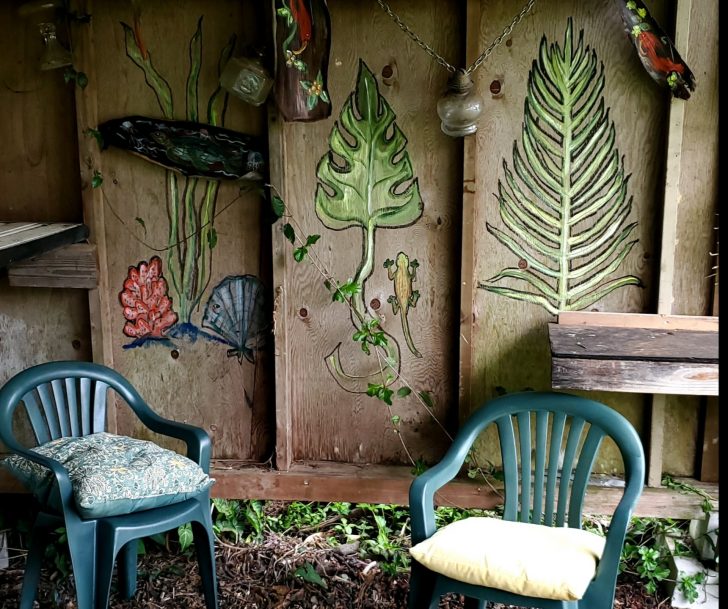 Hawaii on the Cheap

My husband and I love to travel. We especially love to seek out warmer weather during the dark dreary days between December and May. As luck would have it, a close friend had decided to move to the Big Island of Hawaii. Our friend purchased a three bedroom/two bath house with a 3-car garage and an apartment attached. Her goal was to renovate the house to rent furnished and live in the wee apartment. Enter the working vacation.

Because my husband is a kitchen/house designer and I am an amateur landscape designer we decided to give my friend help renovating the living areas and I would design and plant the gardens. In the meantime, we lived in the house for three weeks, gratis. Since we were on the rainy Hilo side of the island the deal was when the sun came out we dropped everything and went snorkeling or hiking in botanical gardens. That was usually in the mornings which worked out well.

Remodeling included pickling the dark paneled walls to look like weather beach drift wood throughout the house. Next, we worked laying flooring, moving around kitchen layouts and stocking the empty house with beds, end tables, linens, rugs, couches, chairs and of course equipping two kitchens. We then bought outdoor furniture, furniture for a patio with a BBQ. I then got to work on painting canvases for the walls from all the touristy places we visited.

With the “bones and basics” handled inside I approached the outside. I found a large three-sided shed and painted it inside with murals and outside I strung palm branches. It is now a Tiki bar. Next, I planted 22 Croatans for a 120-foot hedge. After that I planted fruit trees such as Mangoes, Mountain Apples, Starfruit, Cocoa, Guava and Kona Coffee. Then the fun began. I cleaned up a small pond and surrounded it with tropical plants. And I learned how to plant 22 different types of orchids from the plant supplier to Home Depot. Seems that climbing orchids love to have a small bag of fertilizer the size of a teabag tied 5 inches above them (I cut up an old T-shirt for ties with some give). I placed an orchid in the crux of a tree where the water will gather. I tied it in place with sphagnum moss and strings from the T-shirt, put the fertilizer (any basic granulated will do) above the orchid. The orchid, which is basically an air plant will grow towards the nutrients. I also planted a vanilla bean orchid and a few passion flowers on fences.

Here is the funny thing we didn’t count on. Half our time was spent shopping. If you have recently moved it is like when you have to unpack, but you had to get all your boxes filled in town first.

If you have some HGTV skills you can have a part time vacation in an exotic location. The second to last night we stayed in Kona, the sunny side of the island. We stayed in an Airbnb which was “Glamping” on a mountain. I am not a big camper, but I will say this place really tried to up the game. The tent had a real bed, fluffy big towels and a nice carpet on the floor. The bathroom was, however, a hike up a jungle trail. And camping means critters, but mostly geckos that were awfully cute. There was a community tent with lots of seating and free coffee. I avoided the coffee at night and instructed myself NOT to get up in the middle of the night. I did not want to fall off the mountain into a jungle. Glamping in Kona was about $150 a night, compared to hotels at $500+ a night. I also heard there are cheap Glamping opportunities where you work 20 hours on a coffee farm and sightsee the rest of the time. Where there is a will there is a way…but bring bug spray if you are in dense jungle.