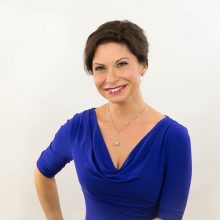 Amy Riolo is the author of The Mediterranean Diabetes Cookbook, 2nd Edition: A Flavorful, Heart-Healthy Approach to Cooking (American Diabetes Association, May 2019, $19.95). She is an award-winning, best-selling author, chef, television personality, and educator.

A graduate of Cornell University, Amy is considered a culinary thought leader who enjoys changing the way we think about food and the people who create it. Amy is a food historian, culinary anthropologist, and Mediterranean Diet advocate who makes frequent appearances on numerous television and radio programs both in the United States and abroad, including FOX TV, ABC, CBS, NBC, the Hallmark Channel, Nile TV, the Travel Channel, Martha Stewart Living Radio, and Abu Dhabi Television.  For more information about Amy, click here.

What You Need to Know about The Best Diet of 2019

There’s a lot of conflicting information out there about what we should eat to stay healthy. With so much contradiction, … Read More→

To Market We Go