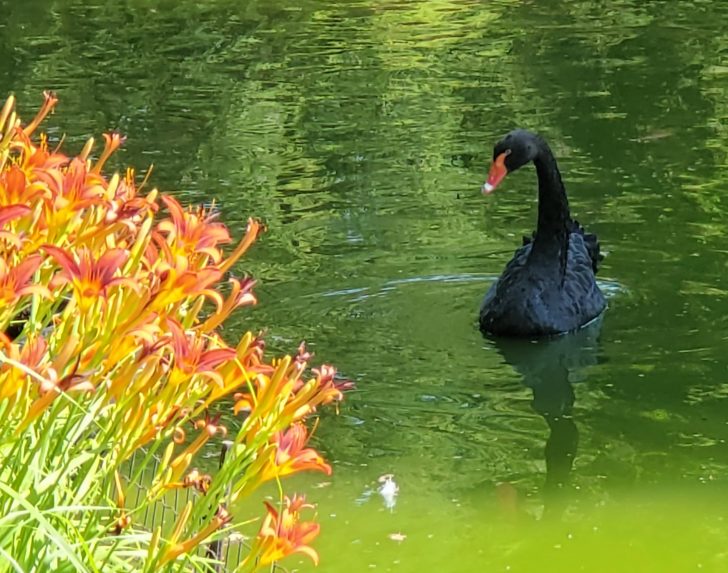 A wonderful day trip out of Riga by car visiting the towns and castles and ruins of Cesis and Sigulda.

Sigulda Adventures has an adventure park with a lovely cable car over the Gauja River to the ruins of an old Medieval castle and an old village. In addition, for the daring, there is a hang glider attached to the cable car cable/zip line that flies you over the river and then back as the car cables push and pull you. Not as dangerous as hang gliding but pretty high up just the same. Across the valley there is the Sigulda Castle, the remains of a 13th -century stronghold with restored towers with views.

Nearby is the charming town of Cesis. There is a lovely park and pond in the center of the town with black swans, formal gardens, play areas for kids and wonderful outdoor restaurants.

The Park is thanks to Count Carl von Sievers who built the park for public use in 1917. While wandering about pursuing interesting architecture look for St. John’s Church, a large basilica. Also, check out City Hall, the Merchant House and the Princess House. The entire restored village of Cesis is fun to wander around. The town is built on the ridges above the Gauja River. (The same river the cable car in Sigulda crosses.)

Whether before or after your meal in the park you will be dazzled with the history of the Cesis castle. It is well worth the price of admission. First built in 1214 by the Livonian Brothers of the Sword and the Teutonic order. It first fell to Ivan the Terrible and his Russian army in 1577. It was rebuilt many times since and is now a well restored facility. It includes an old brewery, a cemetery, and the Transfiguration of Christ Orthodox Church. On the grounds is also the Castle Manor house which is now home to the Cesis History and Art Museum.  The manor house is of the Romanticism period of the 18th and 19th centuries. 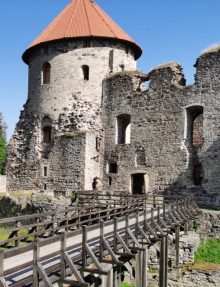 On the grounds just before you cross the bridge over the moat area, you will find a small castle garden and a row of small wooden shops with re-enactment actors baking bread, smithing iron and tanning leather. Yes, all are selling their trinkets. The raisin-nut bread was wrapped up in leaves and roasted in an outdoors stone oven.

Upon entry you are given a lantern with a candle to enter the lower darker floors of the castle. As you reach the tower room there is a fantastic video of the entire history of the castle. The film is projected onto the ancient castle walls for a screen with a 270-degree scope including overhead. They have created it so cleverly that different historical people show up under archways almost like a hologram. At one point when the film is showing a period when the castle had been laid to waste vines seem to grow up and cover all the walls.

Not to be outdone, the dungeon has a series of videos based on actual prisoners who were guests there some indefinitely. You can watch them via video come down a set of stairs. 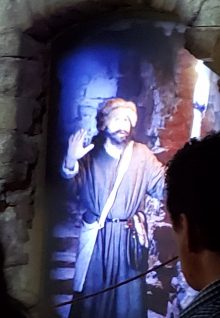 They perch on a step or sit on a chair and tell you how they ended up in this miserable place. They were either captured as spies or as enemy soldiers, or were passing through and were in the wrong place at the wrong time. It was a remarkable way to tell the stories of immigrants and warriors; history through the eyes of the lowers class and outcasts. You easily see both Sigulda and Cesis in one day. It is a wonderful peek inside this wonderful country of war and beauty.