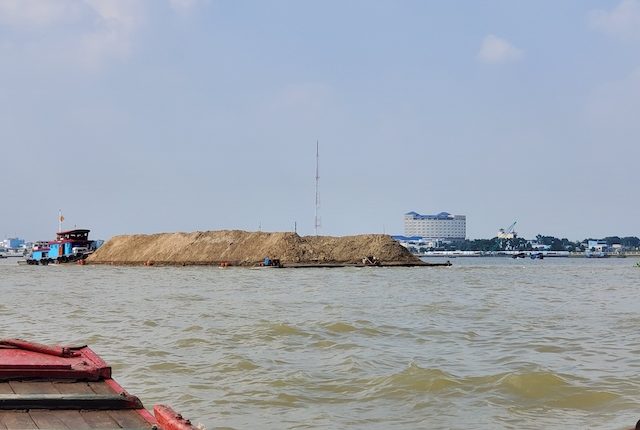 I had mixed feeling about going to the Mekong Delta. Being 69 years old, I had classmates and kids in the neighborhood who went to fight in the Vietnam War. One thing was for sure, I was definitely passing on the tour to the Cu Chi tunnels where the Viet Kong lived during the war. The horror of those places lingers in my heart.

But I was tempted by the flier that guaranteed a tour and tasting at a coconut candy factory. To get there we travelled by van to the delta. Our destination was Unicorn Island. We were taken across the Mekong River in a motorized ferry. From there we hiked through the dense jungle to the coconut candy factory. Waiting for our guided tour, we were offered a free drink of what they call snake wine. It is basically something as strong as vodka poured over a vat of gutted snake bodies. Yum! There is a local belief that it gives you a health boost or some such. I had once tried seal meat in Finland and fermented camel’s milk in Uzbekistan, so I was up for the challenge. Being from the school of “what doesn’t kill you makes you stronger” (that and I am sucker for a dare)…I imbibed. It tasted like vodka. And besides the sudden urge to slither up a tree, there were no side effects at all. A good chaser for coconut candy. 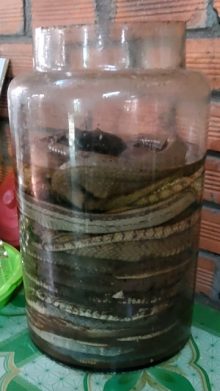 The coconut candy factory was a bit like watching a taffy pull. After a three-foot rope of candy was cut into chunks. they were wrapped in rice paper, which is edible. Now that’s one way to keep plastic wrappers out of the waters. The smell of coconut was everywhere. Flavors included plain, chocolate, hazelnut, and mint coconut. It was fantastic, especially after a belt of that snake wine.

Next, we took a sampan up the little tributaries under palms and flowers to a restaurant. The meal was massive. A huge fish with egg rolls, rice, vegetables and salad. After lunch we took a bike ride through the jungle to see the retirement cottages along the back waterways of the delta. The delta waters are murky.  As with any delta, the soil is being washed away from the upper lands. From there we walked to see the boa farm. The boa I “wore” was quite friendly. Having handled big snakes before, I knew not to let that first hug get carried away. 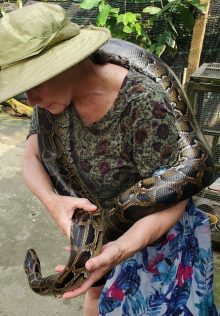 Next, we walked to a honey factory with adjacent beekeeping hives. There you could buy beeswax candles, raw honey, and royal jelly for your complexion.

The last leg of the journey in and through Unicorn Island was aboard a dug-out canoe. We were each given a nón láconical traditional hat for the ride; I imagine to keep branches or creepy crawlies off your head. There were paddlers front and back who wound their way through even narrower passages than before. Here we passed small villages, homes, and docks. I have no idea how they kept the water passages straight. There were no signs. It was a maze of tangled jungle and waterways. After about 20 minutes, we arrived near the docks to return on larger boats back across the Mekong Delta,

Very much a working port, we passed massive barges weighted to the gunwales in sand. One major product from the area is dredging sand and selling it for construction in the cities. Large passenger boats, steamers, and floating sampan markets filled the Mekong River edges. All in all, I can highly recommend this trip to see what has become of Vietnam and the countryside that most of us had only seen in black and white news reels.