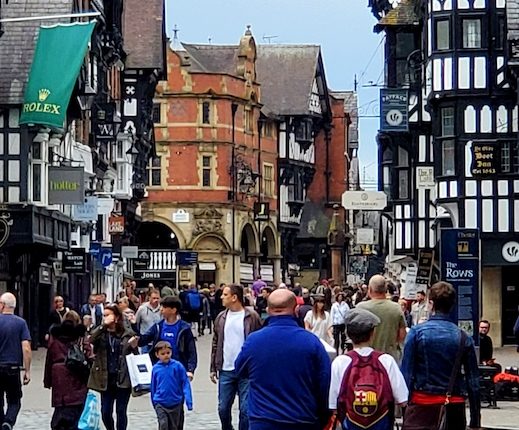 When we arrived outside of Chester, UK via our narrowboat, we were instructed to tie up at the Cheshire Cat Pub outside in the Cheshire countryside.

Apparently, it is a massive hassle to go through all the locks to get into Cheshire proper. We were on a very tight schedule and were glad to avoid waiting in lines at the locks which would eat up most of the day. It was a good decision. There is a cheap bus from a Park-N-Ride about a mile towards Chester. Remember to ask the driver where to pick up the bus home and ask when the last bus home is.

Meanwhile, back at the pub, you can’t tie up directly in front of the Cheshire Cat Pub overnight as those places are reserved, but it was only about 200 feet up the canal to find a spot. The pub is lovely. The food is superb and the WIFI is super helpful after being cut off from the cyber world for three days along the highways and byways, under bridges, and over aqueducts. We made a pact only to check emails from family. Oh, and to post photos on Facebook.

My advice is to take the hop-on hop-off sightseeing bus. This will give you the lay of the land. Chester has been a walled city since the Roman times. There is a garden dedicated to the ancient columns, artifacts, and bath tiles that were found during construction of the more recent city. There are ruins of a chariot racing track. And on top of that are the half-timbered medieval walls and buildings and then the Victorian buildings marked by intricate brick patterns.

The Chester Cathedral has had a house of worship on the site for the last 1,000 years. It is there that Handel first performed the Messiah. You can walk around the original medieval city on a complete ring wall. There are guard houses and apartments built into the walls. 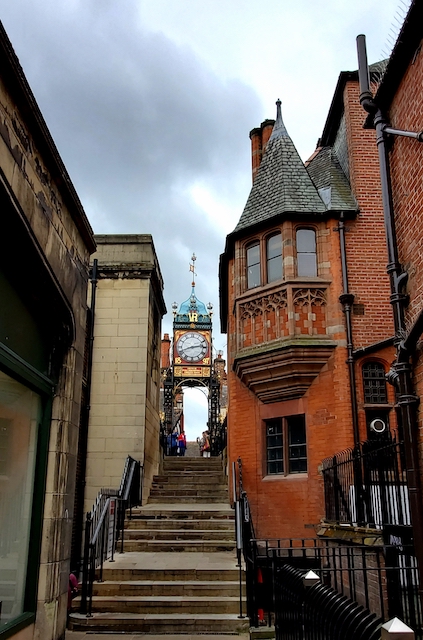 The clock tower in Chester atop the main entrance is an amazing wrought iron sculpture. The Town Hall in the open square was host to several weddings in a row when we were there, and it wasn’t even a Saturday. You can eat on the run or stay for an expensive meal at any number of trendy places. The shops are also “spendy” but fun. Along the river we found artists, crafts people, boat rides, and street performers.

If you only have one day for sightseeing outside of Manchester, this is the place to visit. Oh, did I mention that the best Cheddar cheese comes from Cheshire.