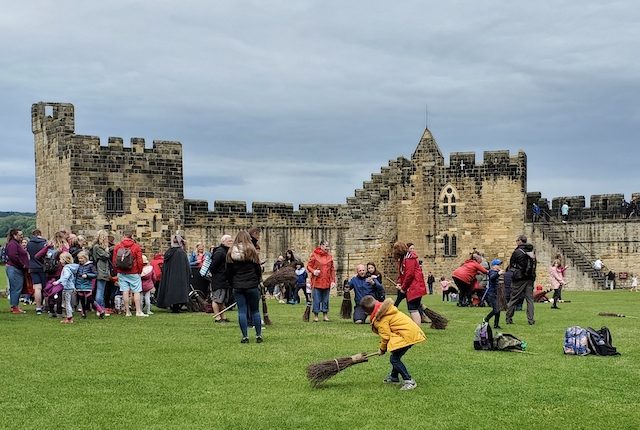 In Northumberland, in the town of Alnwick (pronounced An-ick for some unknown reason) there is a lovely castle, gardens, and play area for children. It is set up for crowds and tour buses. There are well placed maps, a Tourist Information Centre with café, and miles to walk about. It is about 80 miles south of Edinburgh.

The location was used to shoot the Christmas scenes in Downton Abbey and the courtyard was used to shoot the Quidditch scenes in Harry Potter. Today young children can practice a land version of Quidditch. Brooms available for purchase.  Additionally, the grounds have been in films such as: Mary, Queen of Scots; Ivanhoe; Robin Hood: Prince of Thieves; Transformersl The Black Adder; Robin of Sherwood; Star Trek; and The Antiques Road Show.

Throughout the grounds and castle there are actors portraying typical castle characters: a court jester, handmaidens, and shopkeepers. However, it is also still used by the Percy family: the 12th Duke and Duchess and their four children. The Percy ancestors have lived there for over 700 years. They arrived from France with William the Conqueror. The original castle was purchased in 1309. Every Duke had his approach to renovations, and it currently has a large area to tour that is in topnotch shape.

In addition to the well-preserved castle, the reason I choose this tour is the 12 acres of gardens. In the vast Grand Cascade, a serpentine fountain meanders down a hill. On the sides are round arbor tunnels which take you from the bottom to the top to more gardens. There are lawns to picnic on, 50 swinging benches, and of course chairs on the patio of the café. There are roses, cherry trees, formal bedding plants, and fields of wildflowers.

But my favorite garden is “The Poison Garden” known as the deadliest garden in England. Locked behind iron gates and only accessed with a tour guide, there are over 100 toxic, intoxicating, and narcotic plants. Visitors are prohibited from touching, tasting, and even sniffing plants as many can cause nose bleeds or worse. In the summer with fumes wafting people have been known to faint. The most interesting thing is to see how many plants in your own home garden are considered toxic. Laurel can kill you with cyanide. Monkshood, as well as periwinkle, narcissus, poppies, giant hogweed, foxglove, and Lentin rose for starters are all killers in the right dose. The gardener wears a head to toe bee keepers uniform when pruning. The tour guide explains that just touching some plants can give you burns and blisters up to seven years. 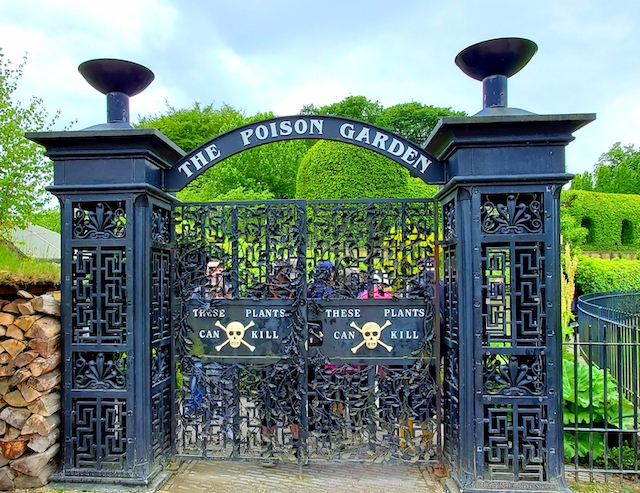 The Poison Garden was planted by Isobel Jane Miller Percy, the current Duchess of Northumberland, in 2005 instead of an herb garden. Apothecary gardens, or medicines/opioids were popular in castle gardens in medieval times. Her choice was to keep a traditional garden and educate visitors. But something tells me folks watched the kitchen staff a bit closer after the garden was installed. Especially when there were Harry Potter workshops going on.