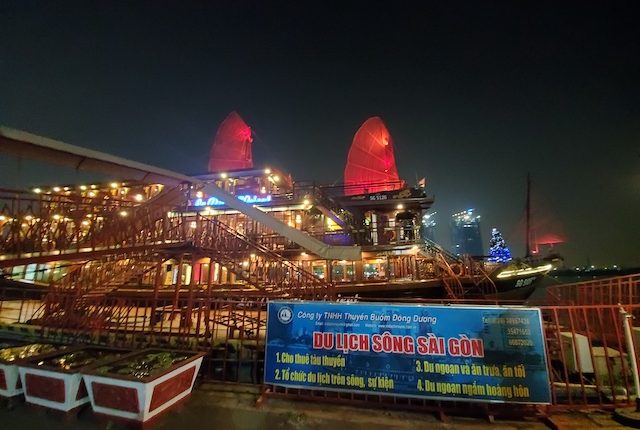 The Saigon River is located in South Vietnam. It starts in Cambodia and flows south about 140 miles. It empties into the Soài Rap about 20 kilometers northeast of the Mekong Delta. We decided to take the evening dinner cruise. We entered the Du Lich Song Sai Gon cruise line around 6pm.

There are many tours to choose from. Some include a Water Puppet show and/or drinks on a sky top roof, but we just wanted the dinner cruise. A tour guide picked us up at our hotel. We boarded a van with 10 other people. The price includes everything: van (to and from hotel), boat fares, and onboard entertainment. On some trips tips, drinks and souvenirs are extra, especially if you are drinking alcohol onboard.

The cruises are typically one and a half hours long. Dinner is served as soon as you leave the dock. The traditional Vietnamese food was in five huge courses. Spring rolls and appetizers, mixed salad, broiled clams and pork, a boiling pot for beef, chicken and shrimp. Your guide comes and empties platers of uncooked vegetables and meats into the pot on your table. After that, there’s a dessert. I must mention that the garnishes on each plate were highly cut vegetables into flowers. Not like I do by scoring the outside of a carrot or zucchini with a fork and then cutting coin shapes. I mean flowers like chrysanthemums. We all quickly Googled “Cut roots into flowers” to see how it is done. I figure it takes an hour to cut each one. Maybe 15 minutes if you have done a hundred. Yeah, not happening any time too soon at home. The quantity and quality of the food was over the top. I took a walk between the massive courses to try to make room for even more food. 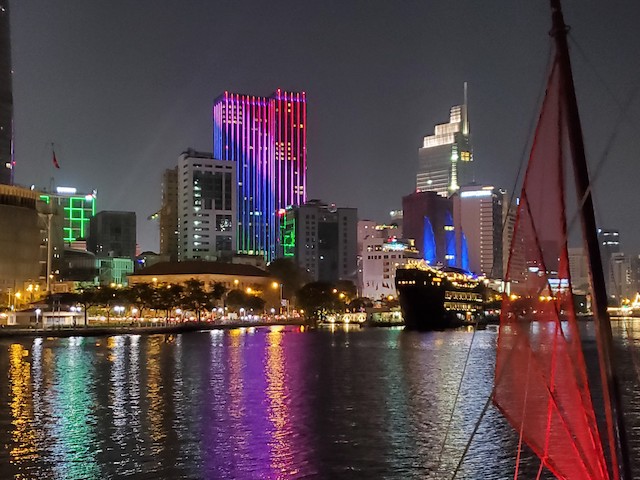 When I returned, the boiling pot had been lit in the center of the table. Not knowing what to expect, I started putting the food into the pot. Out of nowhere our guide appeared and fished it all out. Seems there is a sequence that matters. But since I haven’t cooked with a cookbook in 30 years, I didn’t get the distinction.

After another walk around the deck, it was pot time. That is, our guide dumped our food back in the pot. With noodles and rice on our plates, we fished out the cooked food and ladled broth over the massive size bowls of food. It is times like these that I regret growing up in a family that says you have to finish everything on your plate. I never told my kids that, and certainly know enough not to commandeer grandchildren in front of their parent. I would have asked for a doggy bag, but that was just silly talk since we were boarding a red-eye to Shanghai in four hours.

The entertainment was Vietnamese dancing and singing in traditional costume. They even humored us with an English song, “If you’re happy and you know it clap your hands.” After lo, more food of the dessert kind I meandered to the top deck to get some photos of lights, reflections, and other boats. The air was high 80s, it was a clear sky and no mosquitos. Ho Chi Min City sparkled. A perfect ending to a whizbang three-day vacation to Vietnam.