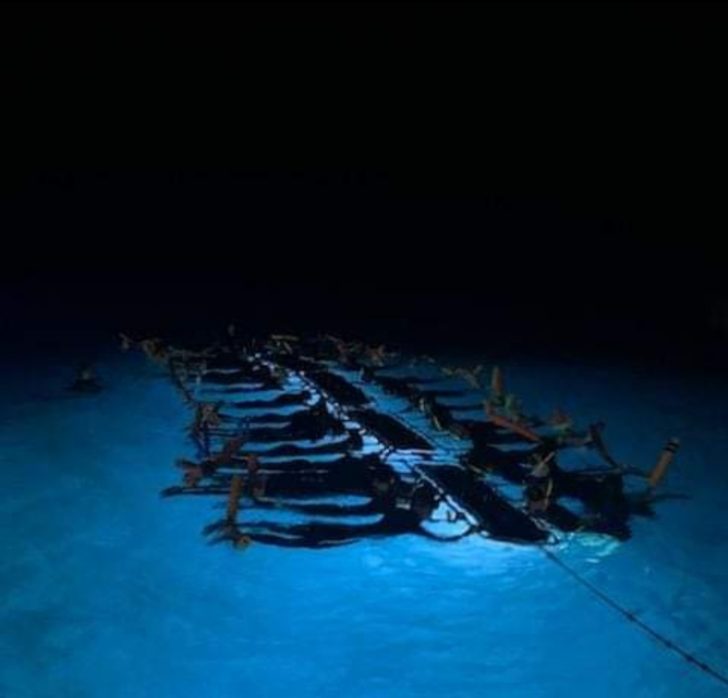 On the second to last night of our trip on the Big Island we decided to throw caution to the wind and sign up for a night snorkeling adventure with the “Sea Paradise Manta Ray Tour”. The absolutely beautiful 50-foot catamaran “Hoku Nui” was equipped with two flushing bathrooms, a snack bar and plenty of smooth fiberglass bench seating. There was also a netted deck “trampoline” for those who wanted to feel and see the ocean beneath them.

Billed as one of the top 10 things to do in the world, yes the entire world, we suited up. I wore a light skin full body suit under the wetsuit which they provided. I was glad later for the extra layer. The tour also provides snorkels and excellent masks. First of all, let me remind my gentle readers that I am fond of returning from such 10 top adventures and that manta rays do not have stingers and can’t eat or sting you. Mantas eat plankton.

It turns out that the nearby Outrigger Hotel had lights shining on the waves crashing onto rocks near an outside bar for ambiance. Someone noticed shadows in the waters. A scuba crew was sent down to see what was darting in the shadows and were stunned to see Manta Rays with wingspans of up to 14 feet. What was particularly odd was that mantas generally feed in the middle of the day when plankton rises to the top attracted by the sun’s rays. It seems that the flood lights tricked the plankton into thinking it was daylight. Then the mantas said, (and I paraphrase here) “I just ate a late lunch. But hey, if this cruise has a midnight buffet who am I to say no.” (Okay I paraphrased a lot). The biologists joined the divers to see how man’s behavior was impacting natural behavior and the idea of Manta Ray Tours was born.

We went on the second dive of the night to be sure that the plankton would be drawn to the lights from a dark sky above. The dive boat strings out narrow floats which are equipped with huge blue glowing lights underneath, these are approximately eight feet long and by rwo feet wide with long bars on each side for handles. Many of these floats are hooked together into what looks like a long water glow worm. Once we were in the correct area (only about 50 feet from shore) we entered the water and were guided to the long float. Some people seemed hesitant to enter the dark choppy waters. I was in front of the line and in the water in a flash. Nothing ventured, nothing gained.

The young guides helped everyone onto the floats and hand-over-hand we made our way down. After we were set, we were told to hook our ankles over a pool noodle. This was to keep our bodies always horizontal to the surface. Given that the mantas are 10-14 feet across they didn’t want anyone to kick a critter. Face down, snorkels up, feet out all 40 snorkelers waited. We looked like a floating spine. Within minutes mantas were gliding silently only 4 feet beneath us. But this was only the prelude.

As the plankton rose to the top of the water the mantas started doing barrel rolls. This means they went the length of the light and turn upside down, tummies to the sky, opened their throats and chugged as many plankton as were to have the misfortune to be in this natural vacuum cleaner’s path. The mantas slid within 4 inches of my face with their huge mouth open. We had been told not to touch the Mantas as their immune system is on the outside on their skin. Scraping a manta might cause abrasion burns. I kept my hands on the bar in front of me. But what if a manta touched me? They came very close.

Now if any of you have been underwater and seen an amazing fish you know you can accidently suck up water by giggling. This happened to me a few times. The longer we watched the choppier and colder the water got. But there was no way I was going in early. My arms got so tired I folded them up like a kindergartener during rest time at her desk. But I was not going in one minute earlier than I had to. My tenacity was rewarded. Toward the last fiveminutes of the adventure one manta came right under us and did a barrel roll, again, close to my face. Then another, and another and another. I counted seven barrel rolls right past my nose in a row. I picked my head up and said to my husband, “I can go now.” He thought I was done for the night, I meant I could die and go to heaven a happy adventurer.