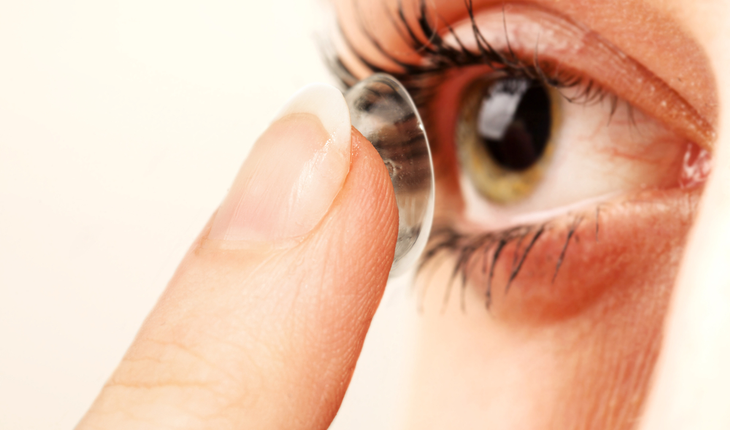 Have you ever considered licking your contact lens when contact solution wasn’t available or buying contact lenses online to save money? Contact lenses are one of the safest options for vision correction, but that doesn’t mean people can take them for granted. Many of us can probably confess to some contact lens care transgressions, but the patient stories below may make you think twice before sleeping in your contacts after a late night out or running a lens under tap water to clean it.

A man in his 20s had been buying contact lenses online without a prescription for over four years, but the lenses he purchased infected his eye, which caused permanent vision loss in one eye. Now, he can’t pass a driver’s test even with glasses and will require expensive specialty contact lenses for the rest of his life.

Keep your contact lenses and case clean with contact solution ONLY: A woman in her 30s had not been to a doctor of optometry for a comprehensive eye exam in over four years when she went to her eye doctor complaining of severe eye pain, redness and light sensitivity. Her exam revealed permanent damage to the surface of her eye because she did not properly care for her contact lenses. She even had to get part-time disability benefits as she recovered.

A high-school student needed to be hospitalized after continuing to wear contact lenses for three days on his injured eye. His eye was severely infected and filled with pus, and he required antibiotics to save the eye. He was lucky to only suffer from some permanent vision loss.

Prior to his election to the Board, Dr. Pierce served the AOA by volunteering his time to the Communications Advisory Group, Professional Relations Committee, Nominating Committee and the Student and New Graduate Committee. He is also past president of the Alabama Optometric Association and served as a member of the SECO Board of Trustees.

Dr. Pierce attended Birmingham-Southern College and is a graduate of the University of Alabama at Birmingham School of Optometry (UABSO) and a past president of the UABSO Alumni Association. In 2010, Dr. Pierce received the UABSO 2010 Alumnus of the Year award and in 2012 he received the Alabama Optometric Association’s Optometrist of the Year award.

Dr. Pierce has been in private practice in Trussville, Alabama for over 29 years.